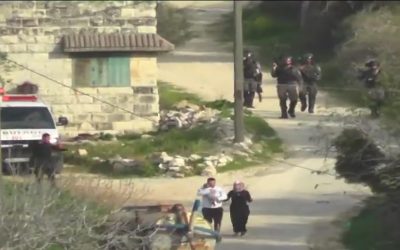 A video published by the Israeli “Volunteers For Human Rights” (Yesh Din) organization, documented Israeli soldiers firing a gas bomb at a Palestinian father and mother, carrying their infant child, during a military invasion into Burin village, south of the northern West Bank city of Nablus, on Friday evening.

Eyewitnesses told Yesh Din that the soldiers fired gas bombs, and hurled concussion grenades at local youngsters, who gathered in the area, after noticing a group of illegal Israeli colonizers gathered there, apparently to carry out an attack.

They added that Israeli soldiers invaded the village, and fired a barrage of gas bombs, including at least of them fired into a home, where an extended family lives, causing many to suffer the effects of teargas inhalation.

Palestinian medics rushed to the area and provided many with the needed treatment for the effects of teargas inhalation, in addition to transferring others to nearby medical centers.

Although the video documents the soldiers directly firing a gas bomb at the Palestinian father, mother and infant, the Israeli paramilitary “Border Police,” claimed that the “soldiers did not see the family when they fired the gas bomb,” and that they “fired it on the side of the road.”

The allegation clearly does not represent what really happened, and what was documenting on film, especially since the Palestinian family was in direct view of the soldiers.