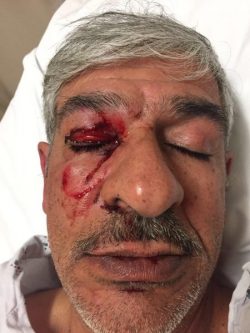 A 55-year old Palestinian-American instructor at a community college in North Carolina was “brutally beaten” by members of the Jewish Defense League (JDL) while walking by the AIPAC conference in Washington DC on Sunday, according to a video and statement released by the Institute for Middle East Understanding (IMEU). The man was identified as Kamal Nayfeh.

The JDL affiliates, according to Mondoweiss,  “punched and kicked him and hit him in the face with flag poles, leaving him with cuts and bruises all over his face and body,” said the  statement. Photos taken of Kamal after the beatings show his face bloodied and bruised.

The video picks up as the violent encounter is in progress. What occurred in the moments before filming began remains unknown.