VIDEO: Quizzed About Israel’s Crimes, US Tries to Change Subject 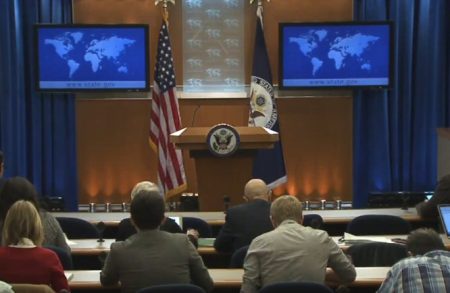 John Kirby, US State Department spokesperson and self-described “lover of history,” knows “the media pivot.” He can ably transition from uncomfortable political terrain – Israeli wrongdoing – to the preferred territory of criticizing Palestinians living under military occupation.

Last week provided Kirby just such an opportunity. The spokesperson was asked by Said Arikat of the Palestinian newspaper Al-Quds for his take on “a group of senior Israeli government officials, notably the Deputy Foreign Minister Tzipi Hotovely … pushing for the total annexation of Maale Adumim, one of the largest settlements in the West Bank.”

The question should have been an easy one for someone in Kirby’s position to answer. All of Israel’s settlements in the West Bank are illegal under international law. Building colonies on territory acquired by force amounts to a war crime.

Yet, rather than calling the settlements illegal or criminal, Kirby described them as “unilateral efforts that would prejudge the outcome of negotiations.”

Kirby then moved swiftly to discuss the problems the US government has with “Palestinian incitement.”

Kirby also voiced concern over “trends highlighted in the Quartet report that are threatening the two-state solution.” He was perhaps referring to a recent publication by the so-called Quartet – an ad hoc group, comprised of the US, European Union, UN and Russia – that purports to manage the Middle East “peace process.”

“These trends,” said Kirby, “also include Palestinian incitement as well. And along those lines, I would just tell you we were deeply concerned by reports yesterday about a Fatah Facebook page praising the Palestinian who shot three Israeli soldiers day before yesterday. And we’ve raised this issue directly to the Palestinians as well.”

“It is shameful that Mr. Kirby is avoiding this extreme Israeli violation by repeating old statements,” Barghouti told The Electronic Intifada.

“Such statements mean nothing as long as they are not associated with specific actions to force Israel to stop building settlements and de facto annexing Palestinian territories in violation of international law,” Barghouti said. He argued that Kirby was “adding insult to injury” by “equating grave Israeli violations of international law” with comments on Facebook.