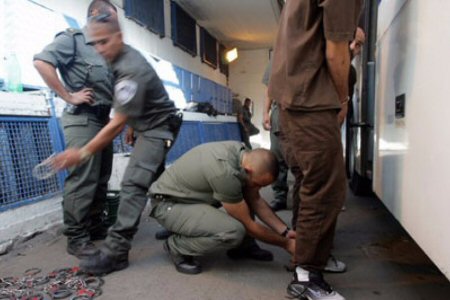 The Israeli Prison Service (IPS), under the cover of the Israeli government, has stepped us violations of international conventions and international humanitarian law against male and female detainees during the holiday of Eid, the Center for Prisoners Studies said on Sunday.

According to Al Ray, the center said that IPS did not respect the sanctity of Eid in prisons, ignoring conditions of sick detainees, isolation in harsh conditions, denial of visits, preventing entry of books, poor food quality and quantity in places of detention lacking the conditions of human life.

The Eid came with the presence of about 6,500 male and female detainees in the prison system, including a 70-year-old sheikh, children under age of 18, and patients in Ramleh prison hospital, amid medical negligence.

The statement stressed the specificity of children’s cases and women detainees who suffer from the lack of health, cultural and psychological care, absence of counselors inside the prison, abuse of detainees during interrogation and dozens of violations against women.

IPS also does not allow women detainees to satisfy their needs from parents,  in addition to ill-treatment and abuse, among other severe procedures.

The statement called on international and human rights organizations to pressure the occupation to stop administrative arrests on secret files without an indictment, release all the prisoners who were re-arrested in the Shalit deal and to stop the return of false sentences against them.

The center called international and human rights organizations to pressure the Israeli occupation to abide by articles of the Geneva Conventions, which affirm the rights of prisoners to perform the acts of worship and holidays, and demanded the media to watch and cover Israeli violations against Palestinian prisoners.