WAFA: “Despite the 202nd demolition since 2000, al-Araqib residents persist in rebuilding their village” 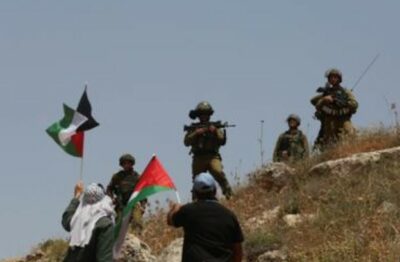 THE NAQAB, Tuesday, June 7, 2022 (WAFA) – The Israeli authorities today demolished al-Araqib village in the Naqab (Negev) desert in the south of Israel for the 202nd time since the year 2000 and the sixth this year, according to reports.

But every time the village is demolished under the pretext of illegal construction, its Palestinian residents return to the land and rebuild their homes in a clear rejection of the Israeli attempt to dislodge them from the land where they lived for decades.

Israeli forces raided the village this morning, said the reports, removed its residents, mainly women, and children, by force, and proceeded to demolish what the residents had rebuilt to shelter their families.

The unrecognized village of al-Araqib is home to twenty-two families, numbering about eight hundred people, living off raising livestock and farming.

In the 1970s, residents were able to prove through legal means their right to own 1,250 dunums of land out of thousands of dunums in the area of Al-Araqib. Yet, they have not been allowed to live in their village in peace.

The Naqab desert is home to over 240,000 Palestinian Bedouins, most of them live in villages and communities not recognized by the Israeli authorities and therefore lack basic humanitarian services such as electricity and water networks, roads, schools, and health centers. Their residents are under constant threat of being forcibly removed and relocated and their homes demolished.