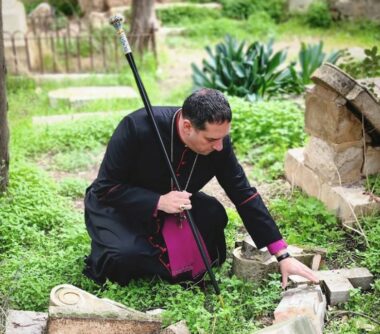 JERUSALEM, Wednesday, January 04, 2023 (WAFA) – The Episcopal Diocese of Jerusalem today condemned what it described as the wanton vandalism by Jewish extremists of the Protestant Cemetery in the occupied city of East Jerusalem.

The Anglican Archbishop in Jerusalem, Hosam Naoum, decried in a press statement the desecration by Jewish vandals of the historic Protestant Cemetery on Mount Zion in the occupied city.

“On the morning of January 3, 2023, it was discovered that, sometime over the New Year holidays, vandals had broken into the historic Protestant cemetery on Mt. Zion, where they purposely and relentlessly smashed to pieces more than thirty gravestones, many of them historic. Security camera footage later revealed that these crimes took place beginning around 1520 on January 1st, and that the perpetrators numbered at least two, both young males wearing (the Jewish) kippahs and tallit katans,” the statement read.

“Among the obliterated tombstones was one containing the bust of the Right Reverend Samuel Gobat, the second Protestant Bishop in Jerusalem and founder of the adjoining Jerusalem University College, formally known as the Gobat School. Three Commonwealth graves of Palestinian police officers were among those destroyed. Many stone crosses were also the targets of the vandals, clearly indicating that these criminal acts were motivated by religious bigotry and hatred against Christians,” it added.

Archbishop Naoum condemned “these wanton acts of desecration” and called “for the relevant authorities to search for, apprehend, and prosecute the perpetrators of these terroristic crimes to the fullest extent of the law, including those laws pertaining to hate crimes.”

He invited “other political and religious leaders both in Jerusalem and around the world to join in condemning and combatting these and other such violent acts of defilement against sacred sites, thereby helping to promote an environment of safety, mutual respect, and religious tolerance in this Holy City that is held in reverence by all three of the Abrahamic Faiths.”

Meanwhile, Palestine Liberation Organization (PLO) Executive Committee member and Head of the Higher Presidential Committee of Churches Affairs, Ramzi Khoury, said that this racist and extremist assault forms a part of the ongoing desecration by Israeli occupation authorities and settlers of the holy sites in Jerusalem and is the natural outcome of Israeli fascist Israeli governments, which provide a cover for impunity for the perpetrators.

In the meantime, the British Consulate-General in Jerusalem expressed its dismay over this attack.

“The UK is dismayed at the attack on the Jerusalem Protestant Cemetery on Mount Zion. This is the latest in a string of attacks against Christians and their property in and around the Old City,” it tweeted.

The Consulate-General called for holding the perpetrators of religiously motivated attacks accountable.