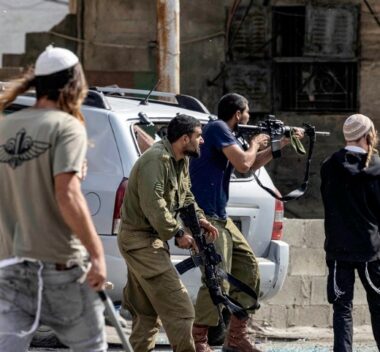 HEBRON, Wednesday, January 18, 2023 (WAFA) – A Palestinian father and his son today sustained injuries in a settler attack in Masafer Yatta, south of the occupied West Bank city of Hebron, according to a local activist.

Fuad al-‘Amour said that a group of settlers attacked a Palestinian man and his family in the Beir al-‘Ad locality, brutally beating them up and hurling stones at them, inflicting cuts and bruises across his body as well as his son’s.

Both casualties were evacuated to a hospital, and their conditions were described as moderate.

The assailants came from the illegal colonial settlement of Mitzpe Yair, located east of Yatta.

Settlers‘ violence includes property and mosque arsons, stone-throwing, uprooting of crops and olive trees, and attacks on vulnerable homes, among others.

Over 800,000 Israeli settlers live in colonial settlements in the West Bank, including East Jerusalem, in violation of International Law and the Fourth Geneva Convention.