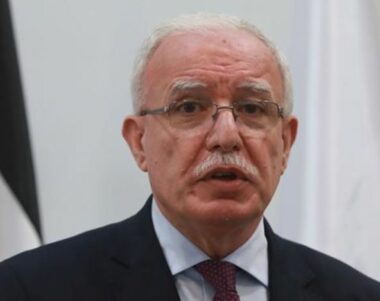 RAMALLAH, Sunday, May 9, 2021 (WAFA) – Minister of Foreign Affairs and Expatriates Riyad al-Maliki said today he had asked the ambassadors of Palestine to begin joint action with their Jordanian counterparts in their host countries, with the goal of reaching out to decision-makers, public opinion and parliaments in these countries and brief them of the Israeli escalation of violence in Jerusalem.

“This joint action by the ambassadors comes within the framework of coordinating joint efforts to mobilize the widest international front to press the occupying power to immediately stop its aggression and systematic violations of international law, international humanitarian law, and human rights law against Palestinians living in occupied Jerusalem,” said al-Maliki in a press statement.

Al-Maliki said Israel has been utilizing former US President Donald Trump’s recognition of Jerusalem as the capital of Israel to enforce a de facto division of the Al-Aqsa Mosque in the occupied capital, which is Islam’s third holiest place of worship, and to make such change irreversible.

He also urged the international community to start hinting at considering sanctions against Israel due to its blatant disregard of repeated calls for an end to its ongoing crimes against the Palestinian people.