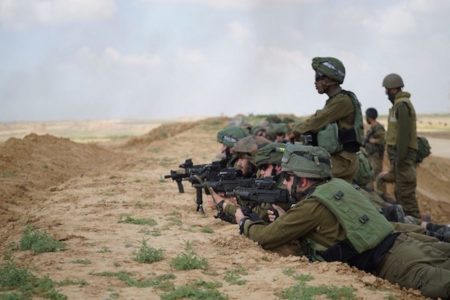 Israeli soldiers shot and injured, on Saturday at night, at least three Palestinians during protests that took place on their lands near the perimeter fence, east of Gaza city, in the besieged coastal region.

Media sources said dozens of Palestinians in Gaza protested the escalating Israeli violations in occupied Jerusalem, especially in the Sheikh Jarrah neighborhood and the Al-Aqsa Mosque.

They added that the soldiers, stationed across the perimeter fence, especially in the Malka military base, fired many live rounds, gas bombs, and rubber-coated steel bullets at the Palestinians, wounding at least three and causing many to suffer the effects of teargas inhalation.

The protesters carried Palestinian flags and wore the kufiyahs, and chanted in solidarity with Sheikh Jarrah, and in condemnation of the Israeli attempts to displace the Palestinians to replace them with illegal colonialist settlers, in addition to the escalating violations against the Palestinians in occupied Jerusalem.

They also chanted against the repeated invasions and violations in Al-Aqsa Mosque, the Palestinian neighborhoods, and towns in the city.

Israel has been trying to remove and evict at least 75 Palestinian families from their homes and neighborhood, to replace them with illegal colonialist settlers.

In addition, the soldiers injured, overnight until morning hours, Sunday, at least 205 Palestinians, including some who were injured in the eyes, during protests that erupted after dozens of soldiers and police officers invaded the Al-Aqsa Mosque; The soldiers also abducted and detained many Palestinians.