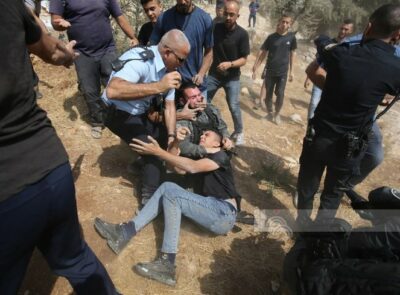 JERUSALEM, Friday, October 07, 2022 (WAFA) – Israeli police and settlers broke today into a Palestinian-owned land in the occupied Jerusalem neighborhood of Wadi Rababa, where they forced Palestinian landowners who were picking olives out of their lands and arrested one of them, according to local sources.

WAFA correspondent said Israeli police stormed the neighborhood and forced Palestinian farmers who were picking olives in their own lands to leave, claiming that the ownership of the lands is disputed, and that far-right settler organizations have ownership claims to these lands.

The Israeli police also arrested a Palestinian landowner, Mohammad Simrin, after forcing the rest of the landowners to leave.

Earlier today, dozens of local Palestinian landowners and their families, accompanied by international supporters, embarked on picking olives in these lands after Israeli settlers broke into some of these lands during the previous two days and stole amounts of olive fruits with protection from Israeli police.

Although the olive harvest has not officially kicked off in Palestine, including Jerusalem, many Palestinian landowners in the occupied capital have decided to start the season sooner to avoid harvest thefts by Israeli settlers.

The Wadi al-Rababa lands in the Silwan neighborhood of occupied Jerusalem comprise about 21 hectares, on which about 800 Palestinian Jerusalemites live in precarious conditions due to harassment and attacks by Israeli forces and settlers, attempting to expel them from their lands.

In early 2018, the Israeli occupation authorities had dug the foundations for a suspension bridge, expected to be 240 meters long and 30 meters high, which would run from the al-Thouri neighborhood, passing through Palestinian-owned lands in Wadi al-Rababa.

The bridge, which was part of a colonialist project funded by Israel Land Authority and the Open Spaces Fund, was planned to establish Talmudic gardens and tourist parks and paths serving the colonial Israeli settlers in the city.