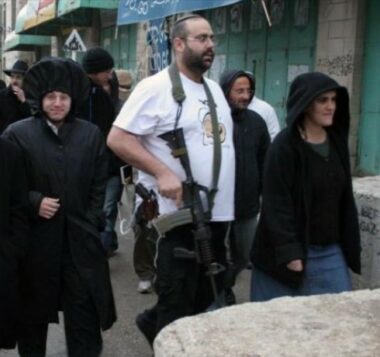 Hebron, Tuesday, January 25, 2022 (WAFA) – Israeli settlers attacked a souvenir shop and several Palestinians in the old town of the southern West Bank city of Hebron, causing damage and injuring one person, according to local sources.

Bader Tamimi, the owner of a souvenir shop in the main market of the old town, said that armed settlers, under military protection, assaulted and hurled stones at defenseless Palestinians in the market, bruising a youth and smashing ceramics and pottery products displayed in the shop.

Tamimi added that the settler attack resulted in causing damage to several stores and vehicles belonging to local Palestinian residents.

Palestinians in the area attempted to fend off the settler attack, but they were prevented as Israeli soldiers showered them with tear gas and stun grenades.

An estimated 800 notoriously aggressive Israeli settlers live under the protection of thousands of soldiers in Hebron’s old town, home to over 30,000 Palestinians.