WAFA: “Settlers’ violence against Palestinians continues with an attack on olive harvesters in Hebron” 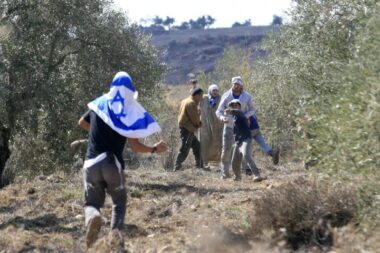 HEBRON, Saturday, October 29, 2022 (WAFA) – Israeli settlers continued today their daily attacks against Palestinian civilians, mainly farmers harvesting their olive crops, with an attack on farmers picking their olives in the Tel Romeida neighborhood in the southern West Bank city of Hebron, according to local sources.

They told WAFA that settlers from the illegal settlement of Beit Hadasa, located in the heart of occupied Hebron, attacked, under Israeli army protection, Palestinian olive harvesters and volunteers helping them and stealing their harvest.

Settlers have been attacking Palestinians harvesting their olive crops in several areas located near the settlements in the occupied West Bank and either prevent them from continuing in the harvest or steal their crops.

None of the attackers have ever been arrested or persecuted for their actions while soldiers provide them with protection and attack the Palestinians who attempt to defend themselves or push the settlers back.