‘What’s the Sin of My Children?’: Infants Killed in Gaza Shelling 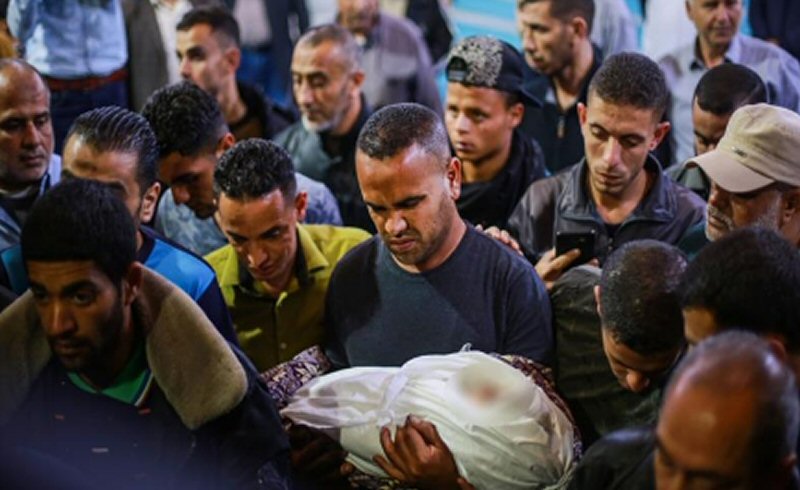 One-year-old Seba was killed, along with her aunt, in an Israeli air attack on their house in Gaza, Saturday.

With her wounded hand, Seba’s mother, 27-year-old Rasha Abu Arar, wiped her tears, ruing the incident that took place following the escalation of violations that has killed at least 25 Palestinians and four Israelis.

“Me, my cousins and their children were sitting in the house when suddenly a rocket fell on us,” a pregnant Rasha told Al Jazeera.

“I wrapped my arms around my daughter to protect her but the shrapnel injured my hand and penetrated her body,” she said as she continued sobbing.

“My three-year-old daughter, Rafeef, was also wounded and is currently in the ICU,” added the mother of six.

“What is the sin of my children? Did they throw rockets at Israel?”

“My heart is bleeding over her orphaned kids. They are very young. How would they continue their life without their mother,” said Falisteen’s mother, Fatma.

According to Al Jazeera’s correspondent, the barrage of rockets fired from Gaza came after an Israeli drone attack in the north of the strip early on Saturday, which injured three people.

More than 200 rockets were fired by Hamas and the Islamic Jihad towards settlements and towns in southern Israel.

Israeli warplanes and gunboats then targeted the Gaza Strip.

Explosions in Gaza City, where busy streets were packed with shoppers making preparations for the holy Muslim month of Ramadan, shook buildings and sent people running for cover.

Israeli warplanes have bombed 200 sites, including military installations and facilities of Hamas, across the Gaza Strip, since late on Saturday.

Two buildings in the heart of the city were totally destroyed, one of the buildings, al-Khuzendar, which was leveled to the ground.

“We were sitting in our shop that sells children’s clothes when, around 10pm, a big explosion rocked the neighbourhood. We rushed outside and saw everyone calling for the evacuation of the building,” said Mohammed al-Hadad.

“I wasn’t expecting our building to be targeted. It’s a business area near the Red Cross delegation in a decent location.”

Al-Hadad pulled out some goods from under the rubble, saying they were “stocking this in preparation for Ramadan and Eid.”

Daoud al-Khuzendar, 27, the son of the building owner, said it took just minutes for the building to collapse.

“The building was built 20 years ago. This was home, our business, and our sole source of income,” said al-Khuzendar.

“Give me one reason behind targeting our building. It was hosting a Turkish charity, cultural offices and residential apartments. Where are the terrorist targets they claim. Who will compensate us for all this?”

As Israeli Prime Minister Benjamin Netanyahu ordered “massive strikes” on the Gaza Strip, on Sunday, the leader of Hamas said his group was “not interested in a new war.”

In a statement, late on Sunday, Ismail Haniya said the group was ready to “return to the state of calm” if Israel stops its attacks “and immediately starts implementing understandings about a dignified life.”