Whose “Ethnic Cleansing?”: Israel’s Appropriation of the Palestinian Narrative 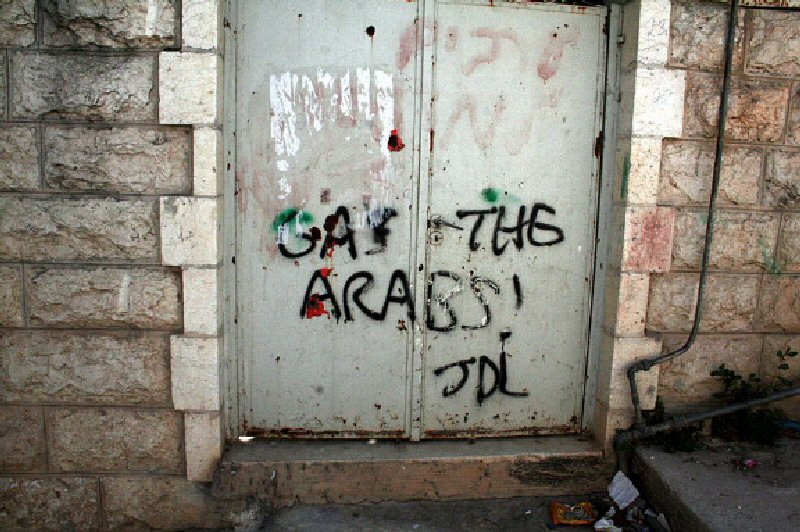 Israeli Prime Minister Benjamin Netanyahu recently claimed, in a video posted on his Facebook page, that the Palestinian demand to dismantle illegal Israeli settlements in the Occupied Palestinian Territory (OPT) constitutes an act of “ethnic cleansing” against Israeli Jewish settlers.  The term, which was originally used as a euphemism during the Serbian campaign against Bosnians, soon came to describe extreme violent practices, mass killings, and forced displacement during conflict and war. It has also been used by many scholars as well as in public discourse to refer to Zionist practices against the Palestinian population in the lead-up to and during the Nakba of 1948. These practices include the destruction of more than 500 Palestinian villages and the expulsion of approximately 730,000 Palestinians from their homes.

Netanyahu’s application of the term to Israeli settlers garnered more than a million views on his Facebook page, and drew millions more via the video’s recirculation across social media platforms. It shocked many analysts, created a tense debate in the international media, and brought condemnation from the likes of then-UN Secretary General Ban Ki-Moon, who called it “unacceptable and outrageous.” Yet such rhetoric, albeit more incendiary than usual, is but the latest instance of an Israeli strategy of appropriating a narrative of victimhood in order to shore up public support.

This commentary traces the history of the Israeli claim to this narrative from the early Zionist movement campaigns of the beginning of the twentieth century to the present day. It marks the ways in which such a rhetorical strategy has been used to justify the state of Israel’s actions to the detriment of Palestinians. It concludes with recommendations for how Palestinian leaders, intellectuals, journalists, and activists can counter the Israeli strategy of appropriation to further their quest for Palestinian self-determination and human rights.

Narratives of Victimhood in Context

In any conflict, actors resort to narratives of victimhood to justify aggression, invasion, and even the killing of civilians. Such rhetoric is intended to establish binary lines of good versus evil, victim versus perpetrator. This mobilizes supporters against “the enemy.” As we see with Israel and in other conflicts, narratives of victimhood serve to legitimize violent and often pre-emptive acts against “the enemy,” perpetuating the cycle of violence and victimhood indefinitely.

By contrast, Palestinian narratives of victimhood draw on the injustice enshrined in the Balfour Declaration of 1917 that began to be implemented before and during the British Mandate of 1923 and since the 1947 UN partition plan. These sentiments continue to this day, and are exacerbated by the international community’s, and the Arab world’s, unwillingness to enforce international law and basic human rights. Thus, Palestinians’ narrative of victimhood cannot be discussed outside of this context and continued Israeli political and military actions against Palestinians in the OPT. The situation includes an unequal power dynamic given that Israel is the mightier power and the occupier; a large number of Palestinian fatalities, including children, as a result of Israeli actions and attacks; and Israeli control of space and territories, as well as resources and movement.

Accordingly, while an analysis of how the history of Jewish persecution and victimhood was – and is – used to justify the actions of the state of Israel should never lose sight of the facts and context of that very real persecution, there is, at the same time, a need to scrutinize the mobilization of this narrative to understand how one group – Israeli Jews – have been granted victimhood, while another – Palestinians – have not, shoring up a power imbalance in which Jewish Israeli rights are favored at the expense of Palestinian rights.

From Victimhood to Ethnic Cleansing

Jewish persecution in Europe is rooted in anti-Semitism and the many ways in which it impacted Jewish communities in different locations and at different times. As for the narrative of persecution, it can be traced to the late nineteenth century, when Theodore Herzl, a father of Zionism, drew on the history of Jewish persecution in Europe to legitimize the nationalistic project of the Israeli state and its settler colonial practices. After WWII, this history of persecution was again invoked to justify the founding of the Israeli state. Indeed, Israel’s Declaration of Independence contends that

the Holocaust…in which millions of Jews in Europe were forced to slaughter again proved beyond doubt the compelling need to solve the problem of Jewish homelessness and dependence by the renewal of the Jewish state in the land of Israel, which would open wide the gates of the homeland to every Jew.

Since the creation of Israel, historical narratives that value Jewish victimhood over Palestinian lives and rights have been used time and again by Israeli politicians. Prime Minister Golda Meir commented, for instance, that Jews have a “Masada complex,” a “pogrom complex,” and a “Hitler complex,” and former Prime Minister Menachem Begin drew parallels between the Palestinians and the Nazis.

Scholarship suggests that Israeli and Zionist leaders manipulated the memory of Jewish persecution, particularly in relation to the Holocaust, as a diplomatic tool in their treatment of the Palestinians. For instance, the Israeli historian Ilan Pappe, in his book The Idea of Israel, argues that these leaders constructed a sense of Israelis as victims, a self-image that prevented them from seeing the Palestinian reality. This, he says, has impeded a political solution to the Arab-Israeli conflict.

In recent years, new evidence and studies have begun to question the dominant claims of the Zionist movement. At the same time, the global solidarity movement in support of Palestinians has been growing, in part thanks to digital platforms that allow global audiences unmediated access to Palestinian stories and lived reality. This has spurred Israeli leaders, PR managers, spokespeople, and their media to focus on diverse strategies to maintain their hold on Western public opinion.

These include using a discourse – such as Netanyahu’s use of ethnic cleansing – to refer to Jews and Israeli citizens as victims of continued persecution by the Palestinians, with the knowledge that these terms have specific legal meanings and, according to international law, are considered to be crimes against humanity. But it is the terms’ associative and emotive meanings, particularly if they are intended to act as reminders of the long history of the persecution of the Jews, that serve to promote Jewish Israeli victimhood at the expense of Palestinians’ experiences of oppression. The term ethnic cleansing also has yet to be used officially in the West in regard to the Nakba, making it vulnerable to Israeli appropriation.

Around the same time as Netanyahu’s ethnic cleansing statement, the Israeli Ministry of Foreign Affairs re-posted a related video on its Facebook page that had originally been released in 2013. The video, titled “Welcome to the Home of the Jewish People,” was billed as a short history of the Jews. It follows the travails of a Jewish couple, called Jacob and Rachel, when their home (the “Land of Israel”) is invaded by various groups, including the Assyrians, Babylonians, Greeks, Arabs, Crusaders, the British Empire and – finally – the Palestinians. It thus proposes that Jews have survived a series of brutal invasions, with the only remaining invaders the Palestinians. The video provoked a strong reaction from Palestinian activists and those who work for Palestinian rights due to its clear attempt to rewrite the history of the conflict, framing of Israeli Jews as victims rather than the Palestinians, and deployment of racialized and violent language in its depiction of the Palestinians.

Netanyahu’s ethnic cleansing video is the latest in a series of videos planned and executed by David Keyes, Netanyahu’s foreign media spokesman, who was appointed in March 2016. Keyes has been a key strategist behind an increase in pro-Israel marketing campaigns on social media. Since his appointment, eight videos with Netanyahu addressing a variety of issues have been posted. All have proved popular among his supporters in Israel and the US.

The arguments in Netanyahu’s statement draw on those proposed in a 2009 document for the Israel Project, a pro-Israel advocacy group, prepared by Frank Luntz, an American political consultant identified with the US Republican Party. In this dictionary-cum-messaging-manual, Luntz details various tactics and terminology as well as tips for marketing and legitimizing discourses while also highlighting shared values with the West, such as “democracy,” “freedom,” and “security.”

With such a focus on the West, it is thus perhaps no surprise that Netanyahu communicates in English in the ethnic cleansing and other videos, with versions available with subtitles in Hebrew and Arabic.

The history of Jewish persecution is a deeply affecting issue for Israelis and, more widely, for the international community, especially Europeans. However, the Israeli use of such terms as ethnic cleansing – at the hands of the Palestinians – wrongly depicts Israel as a victim and the Palestinians as an aggressor. Such rhetoric can be used in the dangerous practice of seeing any criticism of Israeli actions as anti-Semitic or as antagonistic toward Israel. This helps to stymie efforts on the part of Palestinians and Palestinian solidarity movements to hold Israel to account for its actions, such as extrajudicial killings and the illegal building of settlements in the OPT.

Given the fact that battles over narrative are becoming more prevalent and more visible in the digital age, and given the ways in which particular language may be used to deflect attention from on-the-ground developments, Netanyahu’s pointed use of the discourse of victimhood cannot be ignored. Attention to this development is all the more crucial at the current juncture, with Israel planning to expand settlements in and possibly annex further occupied territory, and with international determination and ability to resolve the conflict more sluggish than ever. Attention is also particularly necessary – and strategic – in a year marking the centenary of the Balfour Declaration, the five decades since the 1967 war, and the three decades since the first Palestinian intifada.

The Israeli appropriation of the discourse around victimhood demands a more effective engagement by Palestinian spokespersons, political elites, and activists in the public sphere to expose the reality of Israeli actions and elicit international support for Palestine and the Palestinians. This does not mean taking part in a futile battle over who deserves to be called the real victim in the conflict, but to build a coordinated campaign to refute Israeli claims through evidence.

Such a campaign should contest Israeli narratives by using images and the language of international human rights that appeal to Western publics and leaders. It must always be based on evidence, facts, and context to counter attempts to misinform and disguise actions. The campaign should also train the Palestinian political elite and diplomatic staff in the use of political discourse directed to Palestinians, regionally and internationally, ensuring that the discourse does not legitimatize Zionist discourse by, for example, inadvertently using anti-Semitic tropes. Those Palestinians leading the campaign and international solidarity groups must use Twitter and other social media outlets to target the mainstream media with the real-life situation on the ground in the OPT, as well as facing the Palestinian citizens of Israel and the Palestinian refugees and exiles, using the language of rights and international law.

Finally, the campaign should engage media professionals to train Palestinians and advocacy groups on how to counter propagandistic narratives and statements, as well as how to use digital media to reach out to global audiences.

Only with such concerted efforts can Israel’s strategy of appropriating the Palestinian narrative be contextualized and thus revealed as rhetoric intended to disguise the violence of Israeli settler colonialism.