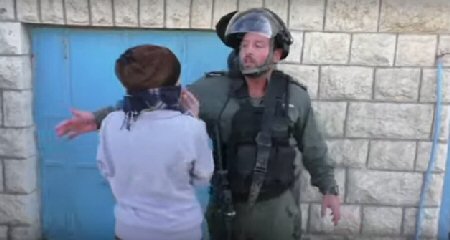 Israeli forces were recently caught harassing and assaulting Palestinian girls as they were watching clashes between children and Israeli soldiers in the occupied West Bank.

B’Tselem said, according to Days of Palestine, that a group of Palestinian boys and teens threw rocks at Israeli forces, who fired rubber-coated metal bullets and tear gas canisters at them, in addition to throwing stun grenades.

“Seven women and girls from the extended Jaradat family stood outside one of the family’s homes watching the clashes,” the group stated. “Four Border Police jeeps arrived on the scene and the policemen who got out began pursuing the youths as they fled. The Jaradat girls also fled.

“A videographer who came on the scene captured the end of the incident on video. The clip shows a masked Border Police officer gripping 13-year-old Khadijeh Jaradat by the arm, while a Border Police commanding officer pushed away her mother, who was trying to help her.

“After the officer let go of Khadijeh, he was caught on video assaulting her cousin, 20-year-old Duha Badawi, beating her on the head.”

Later on, “B’Tselem’s inquiries indicate that Siraj Jaradat, 28, fled with her 10-year-old cousin Samar to the latter’s home. Three of Samar’s sisters were home at that time: Hiba, 18, Shirin, 17 and Kifah, 11. The two closed the front yard’s iron gate behind them, went inside, and then heard loud banging at the front door.

“Siraj and Hiba said that the police pounded on the door and kicked it until they broke the lock, and then came inside.

“The women and girls, who were frightened by the officers, screamed and held on to each other. One of the officers approached Siraj, grabbed her by the shoulder, and pulled her out of the house. Siraj, who was screaming and crying, told the officer she had done nothing.”

“B’Tselem said that after Ibrahim Jaradat, Khadijeh’s and Hiba’s father, had intervened and got the girls and his wife away, and after the Border Police commanding officer kept the officer from hitting Duha again, the officers left the village without making any arrests.

“In the testimony, she Duha gave on 21 January 2017, Hiba said she still had pain in her back, and other parts of her body, as a result of the officer’s assault.”

“The violence of the Border Police officers, who detained, assaulted and hit women and girls, the youngest of whom was 13, is yet another in a long list of incidents documented by B’Tselem over the years, in which security forces used violence against Palestinian children and youths.

“The recurrence of this conduct, and the lack of accountability indicates it is tacitly condoned by the most senior officials of Israel’s security establishment.”