Why Did Hamas Mourn Qassem Soleimani? 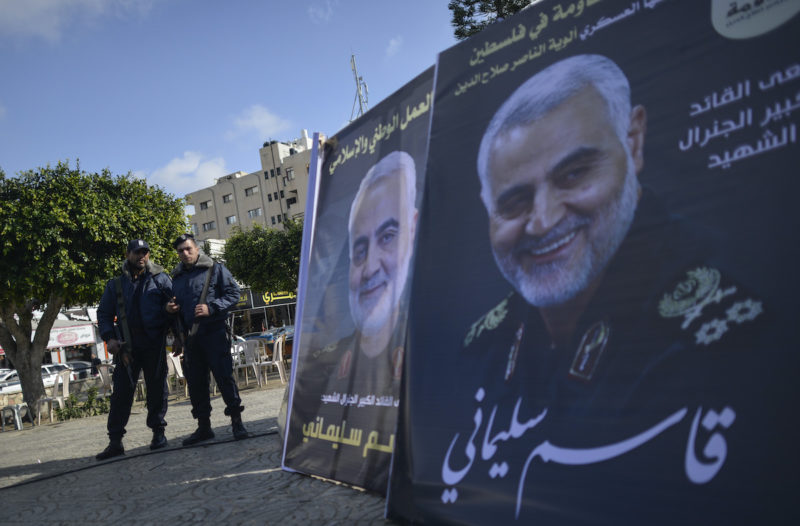 As soon as the assassination of IranŌĆÖs General Qassem Soleimani was confirmed by the Pentagon, the Palestinian Islamic Resistance Movement was among those mourning him and blaming the US for causing chaos in the region through its violations against the ŌĆ£resistance axisŌĆØ in the Middle East, as well as its ŌĆ£blind supportŌĆØ for the occupation state of Israel.

ŌĆ£We mourn the death of Soleimani and the other Iranian commanders killed in an air raid by the US,ŌĆØ said the movement. ŌĆ£On this sad occasion, Hamas condemns the US bullying that creates disputes and upheavals in the regions, just to serve the interests of the Israeli occupation.ŌĆØ

This triggered a wave of criticism on social media in the Arab world, especially in Saudi Arabia and the UAE. Hamas was accused of siding with the Iranian regime, which was described as being ŌĆ£responsible for bloodshed in Iraq and Syria, as well as instability in Lebanon.ŌĆØ

One message from Saudi critics and circulated widely on WhatsApp said, ŌĆ£Hamas should have thrown itself into the arms of Saudi Arabia, the protector of the Sunni project in the regionŌĆ” Soleimani, who was IranŌĆÖs hand in Iraq and Syria, would not have liberated Palestine if heŌĆÖd stayed alive.ŌĆØ

Why did Hamas take such a position? It is a Palestinian resistance movement which believes in ending the Israeli occupation and establishing a sovereign Palestinian state. As long as there is an Israeli occupation, it insists, there will be resistance. This is a legal right guaranteed by international laws and conventions, and recognised by the UN.

The movement also believes that the Palestinian cause should be the central issue of the Arab states and people. This is what all Arabs claim to believe. Almost everyone, though, now knows that this is not the case. Today, the main issue for the Arab states is the legitimisation of the occupation state of Israel by forging commercial, diplomatic and even social and cultural ties, the so-called ŌĆ£normalisationŌĆØ of relations.

Authoritarian regimes in the Arab world are working to undermine the Palestinian resistance by targeting Hamas and other factions. Some of these regimes, such as Saudi Arabia, the UAE and Egypt, are currently working overtly to achieve this goal.

The latter, for example, has enforced a strict Israeli-led siege against the Palestinians in the Gaza Strip since mid-2007. Egypt has imposed all kinds of hardships on the Palestinians who travel through the Rafah Crossing when it is open; it is basically the only gateway for people to enter and leave Gaza. The Egyptian government detains Palestinians, and blocks the flow of goods and free movement, even of people requiring essential medical treatment. Palestinians wishing to pass through Rafah frequently have to pay bribes to Egyptian officials, with the knowledge and consent of the state. Military and security checkpoints on the road to Cairo from the border add many hours ŌĆö sometimes even days ŌĆö to the time taken to make the journey.

In November 2018, I was not allowed to go through the Rafah Crossing after I refused to pay a bribe. The Egyptian security officer told me that I had to go home and when I asked him why, he said that I ŌĆ£should come back the next day.ŌĆØ I did not understand, but he made it clear that I needed to pay a bribe in US dollars. Palestinian travellers have to pay between $500 and $1,500, and sometimes even more, for permission to travel, no matter what the reason is for the journey.

Saudi Arabia and its supporters claim that it is the protector of the Sunni Muslims, including Hamas and the Palestinians. There is much to say about this, but I will focus on the detention of Palestinians in the country which is home to the two holiest places for Muslims: Makkah and Madinah.

When Saudi Arabia, Bahrain the UAE and Egypt announced their siege of Qatar in 2017, they said it was because the government in Doha hosts ŌĆ£terrorist organisationsŌĆØ such as Hamas and ŌĆ£terrorist leadersŌĆØ such as Shaikh Yousef Al-Qaradawi. How can Hamas make overtures for help to a country which incites people against the movement and one of the most respected Sunni shaikhs in the world?

Last year, human rights groups revealed that more than 60 Palestinians are being held in Saudi Arabian prisons. Their families know nothing about their whereabouts or the conditions in which they are being held, although some are known to be denied medical treatment. Two of these detainees are the representative of Hamas in the Kingdom, Dr Mohammed Al-Khodari, who is a sick man over 80 years of age, and his son. How can anyone believe that Saudi Arabia is ready to support Hamas and the Palestinians while such inhumane treatment is being meted out by Saudi officials?

HamasŌĆÖs relationship with Iran is no secret; the movement has said on numerous occasions that it receives military and financial support from the Islamic Republic, which is a largely Shia state. The Palestinians know very well that Iran is antagonistic towards Sunni countries and is responsible, along with the US and other Western governments, and Russia, for the bloodshed in Iraq and Syria. Hamas also knows that Iran backs the Houthis in Yemen, where Saudi Arabia, the UAE and other Sunni Arab countries have been committing war crimes and helping to create the worldŌĆÖs ŌĆ£worst humanitarian crisisŌĆØ.

In its statement about the killing of Soleimani, Hamas explained that the Iranian General ŌĆ£played a major and critical role in supporting the Palestinian resistance at all levels.ŌĆØ The movement is not at a stage where it can afford to reject any form of assistance from any country. This also applies to those with ties to Israel such as Qatar, which has hosted an Israeli trade office since 1995 but also sends humanitarian aid to the Gaza Strip.

As far as Hamas is concerned, though, any and all assistance that it accepts must be unconditional. It is not prepared to bargain away its own or Palestinian principles. When the Syrian revolution broke out in 2011, for example, it was ready to sacrifice support from Damascus and Tehran when it refused to issue a single statement in support of the Assad regime, or at least condemn the popular revolution. It was thus forced to leave Syria, and Iran stopped its support for a while.

During the years of the Israeli siege, Hamas has cracked down on a Shia group in Gaza ŌĆö Al-Sabereen ŌĆō which was dedicated to spreading Shia beliefs among the Palestinian Muslims, who are 100 per cent Sunnis. Hamas did not consider Iranian support when it rejected requests to permit the leader of Al-Sabereen to have free movement, or when it refused to accept funding for a new school because it was offered on condition that it would be named after an Iranian leader.

At this stage, Hamas pays no attention to Sunni-Shia conflicts and does not want to be part of them as they take Saudi Arabia and other countries closer to Israel to the point of possibly forming alliances with the occupation state. Rather, the movement is paying attention to how to end the Israeli occupation, which remains the main cause of Palestinian suffering.

For those states and individuals who criticize Hamas for its ties with Iran, know that Hamas does not want arms or military training from you, but corporate and financial support. It also needs political and diplomatic cover for legitimate Palestinian resistance against the occupation and needs the Arab people and countries to push the Palestinian issue across the international arena. If Hamas is able to depend entirely on its immediate Arab neighbors for support, then it will have no need to seek help from Iran or anywhere else.

Motasem Ahmed Dalloul is a staff writer at the Middle East Monitor. He is a specialist in Middle East affairs.

Opinion/Analysis 12/03/19 Embracing Palestine: How to Combat IsraelŌĆÖs Misuse of ŌĆśAntisemitismŌĆÖ┬Ā