Witness accounts and video footage confirm that the Israeli army has been and is committing war crimes in dealing with the current wave of protests against the occupation, colonization, and ethnic cleansing in Palestine.

On Friday, December 8, 2017 around 4:30 PM, ISM activists clearly witnessed and filmed a unit of of around 40 Israeli soldiers and commanders in the H1 area of Hebron – which, according to the 1997 Hebron agreement, should be fully controlled by the Palestinian Authority – intentionally injuring the backs, shoulders, and heads of two randomly arrested teens. Much of this occurred after they had been handcuffed, blindfolded, and were held in custody. 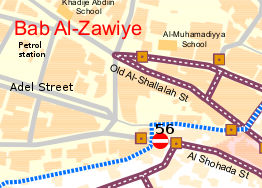 The incidents took place shortly after the Israeli forces invaded Bab al-Zawiya from the military Checkpoint 56 (Shuhada Street in H2) and stormed more than 300 meters up Adel Street, as well as two other main civilian thoroughfares.

The teens were captured near the Hasona Petrol station. If previous child arrests in that area are any indication, they were likely grabbed at random from the street without having been involved in any form of protest beforehand.

The video evidence below, a combination of 3 different camera positions, shows how cruelly the teens are treated by different soldiers, while and after they were handcuffed, blindfolded, and cooperating with the soldiers in walking to Israeli controlled H2.

The almost-raw video footage of all three cameras is included and viewable with the following hyper-links:

Human Rights Watch (HRW), an NGO that is widely acknowledged for its monitoring and determination of human rights abuses, compiled a readable publication based on the 685 page ‘ICRC Customary International Humanitarian Law’ study manual.

In the HRW publication, war crimes are defined as:

“Serious violations of international humanitarian law, including the mistreatment of persons in custody and deliberate attacks on civilians and civilian property, when committed with criminal intent amount to war crimes. Criminal intent requires purposeful or reckless action. Individuals may also be held criminally liable for attempting to commit a war crime, as well as assisting in, facilitating, aiding or abetting a war crime. Responsibility may also fall on persons ordering, planning, or instigating the commission of a war crime. Commanders and civilian leaders may be prosecuted for war crimes as a matter of command responsibility when they knew or should have known about the commission of war crimes and took insufficient measures to prevent them or punish those responsible.” [emphasis added]

Based on this definition, the video depicts a war crime committed by the Israeli army, for which it’s soldiers and commanders bear responsibility.

This isn’t the 1st documented war crime committed by the Israeli state or its armed forces against the Palestinian people. Other examples include:

It is the obligation of all states that have signed the multiple international treaties violated here to stop these Israeli war crimes, and a duty of the people to put pressure on their governments to do so.