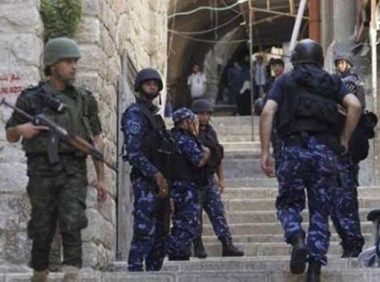 The Palestinian Center for Human Rights (PCHR) follows up with concern the security chaos in Nablus, the latest of which were the clashes between Palestinian security services and a number of armed persons today morning.

These latest clashes resulted in the killing of a woman inside her house and injury of five Palestinian police officers. PCHR calls upon the Attorney General to investigate this incident, publish the results and take the necessary measures against those involved.

According to PCHR’s investigations, at approximately 06:00 on Wednesday, 16 November 2016, an armed group attacked Palestinian security officers from the National Security Service,

Police and Special Units, which is always present in Daraj al-Aqaba area in Nablus’ Old City, north of the West Bank. Violent clashes erupted between the two parties, due to which 5 Palestinian police officers were wounded. They were identified as:

At approximately 06:30, the clashes intensified, as a result, a bullet penetrated a window of a house belonging to Hilda Bassam al-Osta (38). The bullet hit Hilda in the chest, due to which she died even before she was taken to hospital.

In a subsequent development today morning, outraged persons organized a protest at Nablus intersection in the center of the city and closed the stores. The security officers confronted them and opened fire in the air and fired tear gas canisters.

In his comment on the incident, Nablus’ Mayor major-general Akram Rjoub stated to local media, “Armed persons attacked Palestinian security officers after Israeli forces had finished their incursion into the city. As a result, a number of Palestinian security officers were seriously injured while a woman, who was in her house balcony, was killed.” He added that investigations were ongoing to identify the source of the bullet that killed the woman.

PCHR condemns the killing of al-Osta and injury of Palestinian police officers, and:

1.     Calls upon the Attorney General to investigate the incident, publish the results and take the necessary measures against those involved;

2.     Is concerned over the deteriorating security chaos, especially in Nablus, and the increasing number of victims due to the use of firearms; and

Calls upon the competent authorities to take the necessary measures to put an end to the proliferation of weapons, maintain the safety and security of civilians and meet the human rights standards when dealing with fugitives from justice.