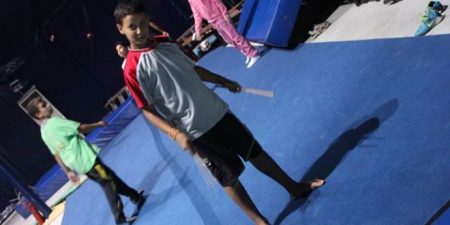 12-year-old student at the Palestinian Circus School, Sohaib Saeed, was abducted last Thursday, in Birzeit, by the Israeli occupation army.

The school, in a statement expressed outrage about the imprisonment of the child, saying that this arrest “will inflict serious and lasting damage on his mental and physical well being.”

“Israel is the only country in the world that automatically prosecutes children in military courts that lack basic and fundamental fair trial guarantees,” the school said, according to the PNN.

“A UNICEF report of 2013 concludes that the ill-treatment of children who come in contact with the (Israeli) military detention system appears to be widespread, systematic and institutionalized throughout the process, from the moment of arrest until the child’s prosecution and eventual conviction and sentencing. ”

During the last 2 years, Israel has become extremely harsh in punishments against stone throwing. In 2015, not only did the Knesset (Israeli Parliament) pass a very controversial law which stipulates that all stone-throwing Palestinians can be sentenced up to 20 years in prison, but the security cabinet also approved rules allowing Israeli police and soldiers to use live ammunition during protests, where in most cases Palestinians throw stones at Israeli soldiers and army vehicles.