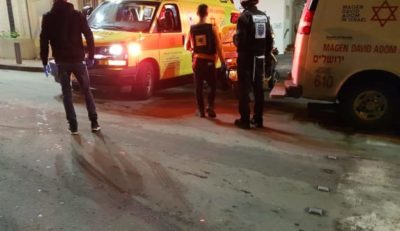 A 17-year old Palestinian allegedly climbed the fence of a police station in Jerusalem Wednesday and attempted to attack the officers stationed there, according to Israeli sources. The officers shot the young man multiple times, seriously wounding him.

Three Israeli officers were allegedly ‘lightly’ wounded – and a fourth was shot by so-called ‘friendly fire’ when the officers opened fire on the suspect.

All of the officers, except for the one who was shot in the arm by fellow officers, were released from the hospital shortly after being admitted.

According to Israeli media sources, the suspect approached the Oz police station in the East Jerusalem neighborhood of Jabal al-Mokabber, climbed the fence and then approached the officer stationed at the entrance.

The Israeli medical service Magen David Adom arrived on the scene at 10:32 pm, and a representative of the group told the Jerusalem Post that they treated three officers who “were fully conscious and sustained minor injuries.” The medics “gave them first aid and took them to the hospital, fully conscious and in stable condition.”

The Israeli officers were taken to Sh’are Tzedek Hospital and were all released soon after, apart from the one shot by a fellow officer.

Border Police Commander Yaakov Shabtai told the officers who were wounded, “You managed to spot the terrorist [sic] and to identify him as a suspicious person and acted with determination which, along with the other fighters who came to the scene, to the neutralizing of the terrorist.”

Eyewitnesses said dozens of soldiers and intelligence officers invaded the neighborhood before storming Abu Jamal home, and searching it.

The soldiers also abducted Abdul-Rahman’s mother, and took photos and measurements of the home, to demolish it later.

The soldiers also surrounded Jabal al-Mokabber Secondary School, which Abdul-Rahman attended, and tried to invaded it, but the students an administration protesters and foiled the invasion.