3 Slain Palestinians Will Not Be Buried in “Numbers” Cemeteries 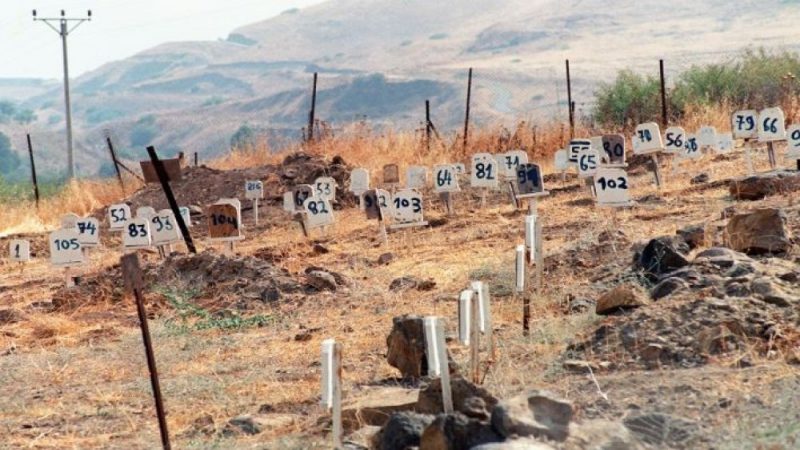 The Israeli state has decided not to bury the bodies of three Palestinians in Israel’s so-called “cemeteries of numbers,” though the Israeli Supreme Court has postponed ruling on a petition filed by the families of the slain men to have the bodies released for proper burial, according to Muhammed Mahmoud, an attorney from the Palestinian Committee of Prisoners’ Affairs representing the families.

Ma’an reports that the Israeli state prosecution’s decision came in response to an urgent appeal submitted to the court last week, by Mahmoud, on behalf of the families of Adel Ankoush, 18, Baraa Saleh, 18, and Osama Atta, 19 — all from the central occupied West Bank town of Deir Abu Mashaal — that demanded their sons’ remains be handed over.
Israel has detained their bodies since the three were shot dead after carrying out a stabbing and shooting attack that left an Israeli police officer dead outside of Jerusalem’s Old City on June 16.
Human rights organizations have widely condemned Israel’s policy of withholding Palestinian bodies, with prisoners’ rights group Addameer calling it a form of “collective punishment” against Palestinians who had not been accused of any wrongdoing, also noting that it “adds to the severe grief and trauma of families of the deceased.”
Furthermore, the three families in Deir Abu Mashaal have had their homes punitively demolished and blown up, leaving a total of 22 people homeless despite having not having been charged with any wrongdoing.
The petition submitted by Mahmoud over the three bodies came amid an ongoing petition submitted to the Israeli Supreme Court calling for the release of the bodies of nine slain Palestinians, which also included the remains of Ankoush, Salah, and Atta.
Despite the fact that the court has yet to reach a decision on the case, the Israeli state announced earlier this month that the bodies of four of the Palestinians included in that appeal have already been buried in cemeteries of numbers — mass graves comprised of marked and unmarked plots of mostly Palestinians killed by Israeli forces over the past 60 years.
The appeals came after Israel’s Minister of Public Security Gilad Erdan requested that withheld Palestinian bodies be buried in the cemetery of numbers, to be used as a bargaining chip with Hamas to secure the return of Israeli soldiers believed to be held in the Gaza Strip.
In addition to Israel’s hope that the bodies can be used as bargaining chips, Israeli authorities have also claimed that the policy of withholding remains is an attempt to avoid “incitement” during funerals of Palestinians killed by Israeli forces in the occupied territory. When bodies are returned, Israel imposes strict conditions on funerals.
Palestinian leaders have expressed their lack of hope in the Israeli Supreme Court to provide justice on the case. At a recent demonstration in Bethlehem, head of the Palestinian Committee of Prisoners’ Affairs Issa Qaraqe denounced the judiciary as “unjust, biased, and nothing more than a tool serving the occupation’s racist and extremist authorities.”
09/16/17 Dr. Ashrawi Denounces Decision to Bury Palestinians in “Numbers” Cemetery