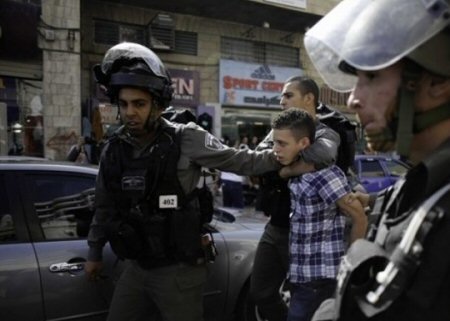 The Prisoners and Ex-Prisoners’ Affairs Committee said that Israel detained 35 Palestinian children during September, and imposed on them fines exceeding $12,600.

The committee confirmed, on Thursday, that minors, who are younger than 18 years, were held at Ofer military camp, near Ramallah, of whom four were detained during night raids from their homes, 20 taken from the streets, seven detained at military checkpoints, three detained after being summoned and one for being in Israel without an entry permit.

Fourteen Palestinian minors were brutally beaten during their detention.

Twenty minors who were sentenced to prison terms ranging between 31 days and nine months and two were held in administrative detention without charge or trial.

The committee stressed, according to Ma’an, that the detention of minors is a violation of international law and the convention on children.

The majority of Palestinian children are detained from their homes in the occupied West Bank during predawn raids by heavily armed Israeli soldiers.

Following their detention, children arrive at an interrogation center without an adult present, sleep deprived and often beaten. Israeli interrogations consist of physical and verbal abuse, forcing the children to confess to any crime Israel charges them with.
Most of the detained Palestinian children are charged with stone throwing.

According to prisoners rights group Addameer, there are 270 Palestinian child prisoners being held in Israeli prisons, of whom 50 are under the age of 16.