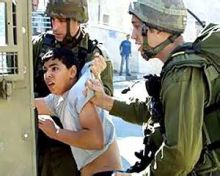 Israeli soldiers kidnapped on Sunday evening two residents at the Qalandia roadblock near the northern West Bank city of Nablus, local sources reported. A Palestinian child was moderately wounded after being attacked by soldiers in Hebron. The sources added that soldiers kidnapped Jihad Abu Awwad and Mustafa Mohammad Mustafa while standing near the Qalandia roadblock on the main Ramallah-Jerusalem Road.

In Hebron, in the southern part of the West Bank, a Palestinian child was moderately wounded after being attacked by Israeli soldiers near Keryat Arba’ settlement in the city.

The child Mahmoud Ibrahim Jaber, 16, suffered several fractures in his arm and was moved to a local hospital for treatment.

In related news, Israeli soldiers invaded Jayyous town near Qalqilia, in the northern part of the West Bank, and handed the parents of four residents military orders to head to nearby military camps for interrogation.