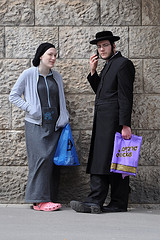 An Israeli-government funded Jewish religious school received a fine Wednesday from the Israeli government for refusing to adhere to a court order made last August requiring the school to end its policy of accepting only Ashkenazi (white European descended) Jews, and not Jews from other racial and ethnic backgrounds.In an attempt to maintain its segregated school system, in which non-white Jewish students from Africa or Arab countries are put into separate classes from white students, the Beit Yaakov school, located in the West Bank settlement of Immanuel, moved into an adjacent location not authorized by the Israeli school system.

74 girls are currently enrolled in the unauthorized school, and the Israeli government has notified the parents of the girls that they are in violation of the law, and will be held complicit in the school’s refusal to adhere to the law.

Israeli law and policy has historically created a multi-tiered system based on race, in which Ashkenazi Jews of European origin hold the highest status, followed by Sephardic Jews from north Africa, then Mizrahi Jews from Arab countries. Non-Jews are openly discriminated against, and that discrimination is codified in over 50 Israeli laws.

The Israeli government says the school will be fined 5,000 shekels per day that it remains out of compliance.