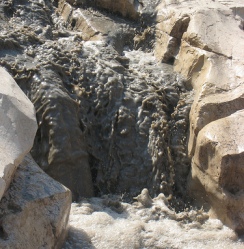 In 2009, the Israeli Information Center For Human Rights in the Occupied Territories, B’Tselem, published a joint study with the Israeli Nature and Parks Authority
Environment Unit and Israel’s Environmental Protection agency, revealing that only 81 Jewish settlements in the occupied territories are connected to wastewater treatment facilities.

This issue leads to dumping 5.5 cm of raw wastewater into the valleys and streams of the West Bank.

But Landau insists that nearly %70 of settlements wastewater is treated comparing to only %5 of wastewater from the Palestinian territories.

B’Tselem stated that Israel did not build any advanced wastewater treatment plants in West Bank settlement comparing to advanced plants in Israel.

It added that this issue is a major factor behind the failure to build two out of three wastewater treatment facilities planned in the West Bank.

The one and only facility that was approved and built is located in Area B and is connected to Psagot illegal settlement, but the settlement refuses to pay for the treatment.