Al Quds Brigades: “Hamas Arrested Some Of Our Fighters” 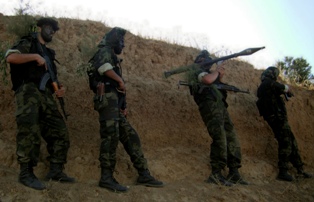 The Al Quds Brigades, the armed wing of the Islamic Jihad, stated that the security forces of Hamas in the Gaza Strip arrested some of its members while preparing to attack under-cover Israeli forces invading the area. The Brigades stated that the detained fighters are members of Nabil Masoud Unit, and that they were arrested while preparing to exchange fire with invading Israeli forces.

The Islamic Jihad strongly denounced the arrest and stated that the fighters were detained for more than four hours at a security base, and that usually the security forces evacuate this base due to Israeli threats to bomb it.

A senior leader of the Islamic Jihad said that the fighters were not treated respectfully “as if the fighters are criminals, imprisoned behind bars”.

The leader added that the security forces of Hamas demanded the fighter not sign affidavits stating that they will not carry any attack under the pretext of “undeclared truce with Israel”.

He said that there is not truce with the occupation especially since the army is invading and attacking the Palestinians in Gaza on a daily basis.

The Al Quds Brigades said that its fighters will continue their struggle and will counter any Israeli aggression against the Palestinian people.