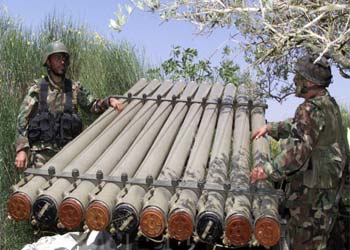 Israeli security sources reported Thursday morning that two Katyusha rockets were fired at Eilat city. Israel is investigating the possibility that the rockets were fired from the Sinai peninsula although they seemed to have been fired from Jordan.Israeli daily, Haaretz, reported that one of the shells hit an area close to the Al Aqaba Jordanian costal city; no injuries were reported.

The Israeli army and the Jordanian security forces have coordinated an investigation into the incident.

Local sources in Eilat stated that an explosion was heard in the city around five at dawn. Israel decided to shut down its crossing with Egypt in Sinai but reopened the crossing for traffic after finding no indication of the source of explosion.

Meanwhile, Israeli paper Maariv, reported that explosions were heard in Eilat and that the army and the Israeli security forces rushed to the area to investigate the issue.

Smoke was seen in the Jordanian industrial area in Aqaba, while another shell landed near the beach. Jordan closed the industrial area pending further investigation and developments.

Maariv added that the Israeli army found a launching pad in Sinai while an army spokesperson said that it seems that a cell had tried to fire rockets into Israel but they landed in Jordanian and Egyptian territories.

The Bureau believes that some groups are planning to abduct an Israeli in Sinai who would later on be moved to the Gaza Strip via the tunnels on the Gaza-Egypt border.

In 2001, the Jordanian security Forces arrested a number of fighters, believed to be affiliated with the Lebanon-based Hezbollah party. The fighters reportedly planned to fire several missiles into Eilat from Aqaba.

In 2005, a group reportedly affiliated with the Al Qaida network fired three Katyusha shells, one aimed at Eilat and two aimed at American Navy ships docked in Al Aqaba.

The shells did not cause damage or casualties in Eilat while a Jordanian soldier was killed and another soldier was wounded.