PPS: “Detainee Who Died Last Week, Was Hit On His Spine, Neck” 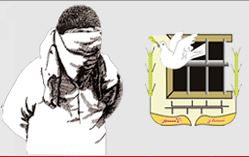 The Palestinian Prisoners Society (PPS) reported that detainee Raed Abu Hammad, who died on April 16, was hit by Israeli interrogators on the center spine and the back on his neck, and died of his wounds in his cell.Forensic examination revealed that Abu Hammad was healthy and did not suffer from any health condition. He was also an athlete and in a strong body shape.

The examination also revealed that Abu Hammad was tortured during interrogation and was struck on the center of his spine causing damage to the spinal canal in addition to being violently hit on the back of his neck. He was found dead in his cell at the Be’er Sheva Israeli prison.

The Palestinian Prisoners Society held Israel responsible for the death of Abu Hammad, demanded an immediate and independent investigation into his death, and called for prosecuting the interrogators who tortured him.

The PPS stated that this crime is one of hundreds of crimes committed by the Israeli army against the detainees, and added that the forensic examination proves without any doubt that Israeli jailors and interrogators are behind Hammad’s death.

It stated that Palestinian and Arab detainees imprisoned by Israel are subject to constant violations, illegal torture and interrogation techniques.

On April 17, the Palestinian Prisoners Day, the PPS reported that Israel arrested more than 70.000 Palestinians since 2000, 800 of them were women and 8000 were children.

Qaddoura Fares, head of the PPS stated that the current number of detainees imprisoned by Israel is 7000, held in 25 prisons, interrogation centers and detention camps.

Israel is holding captive 16 legislators and ministers, 36 female detainees including 4 mothers, and 340 children. 5700 detainees are from the West Bank, 780 are from the Gaza Strip, 450 from Jerusalem and 47 detainees from the Arab world.