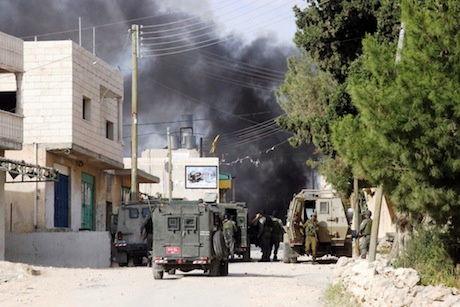 Palestinian medical sources report on Monday morning a fighter of the Al Qassam Brigades, the armed wing of Hamas movement, was killed during clashes with Israeli soldiers who surrounded a home in Beit Awwa town, south of Hebron, in the southern part of the West Bank. The fighter was identified as Ali Al Sweity, 40. He topped Israel’s wanted list for eight years. The Al Qassam Brigades confirmed the fighter was killed and vowed retaliation.

Local sources reported that Sweity was at the home of his relative Mahmoud Sweity who is currently imprisoned by Israel.

The sources added that at least 70 military vehicles and a bulldozer invaded the town and surrounded the home of Sweity demanding everybody to surrender. The army then opened fire at the home forcing everybody out.

Ali did not leave the home and exchanged fire with the soldiers for more than four hours before the army detonated the home and crushed Al Sweity to death.

The soldiers refused to allow the residents to remove the body from under the rubble for more than one hour; later on, troop pulled the body with ropes and handed it to the residents.

The army sealed all of the entrances of the town and prevented medics and journalists from entering the area. Soldiers them demolished several parts of the home rendering it unsafe to live it.

Following the attack and the killing of Al Sweity dozens of youths clashed with the invading forces. Six Palestinians were wounded, one of them was shot in the head, and five soldiers were slightly injured.

Later on, the residents carried the body of Al Sweity and marched in the streets of the town and in Doura nearby city. Al Sweity was buried at the local graveyard in Beit Awwa.

Al Sweity was wanted for eight years, and was a senior member of the Al Qassam Brigades.

The Israeli Radio reported that the army “scored a big achievement in assassinating Al Sweity” who was labeled as “dangerous” and as a central figure of the Al Qassam Brigades.