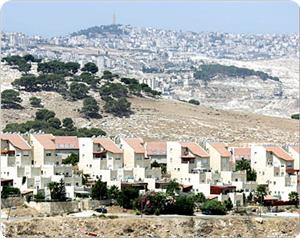 The Israeli government, headed by Benjamin Netanyahu of the Likud Party, approved the construction of 14 units in Maaleh David outpost, which is a new settlement neighborhood planned to be built in Ras Amoud Palestinian neighborhood in occupied East Jerusalem.Israeli Peace Now Movement issued a press release stating that the new settlement will include 104 units and will be connected to Maaleh Zeitim outpost.

The area in question includes a former police station in Ras Al Amoud as the station was moved to an area in Maaleh Adumim settlement. The station will be demolished and will be replaced by seven apartment buildings.

Peace Now said that the new construction will not only jeopardize the indirect talks but would also sabotage all efforts to achieve peace in the future.

Settlement construction and expansion, especially in occupied East Jerusalem, is one of the core issues that obstruct the peace-making process and undermine the legitimacy of the talks.