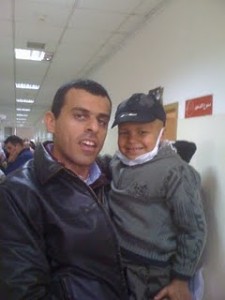 Today I woke up with this Tweet in my mail box:

Iyad Sami Zindah, 5 yr old, died today of cancer after Israeli occupation forces prevented him from leaving #Gaza 2 get treatment #PalestineMy story with Eyad started last December, 7 months ago. I received a message from a friend that there is a family in Amman from Gaza who are treating their kid from cancer and they need help. I called the parents and met them a few days later. And there were my story began with Eyad.

To set things straight Eyad was 6 years old, had lung cancer for 4 years. The Palestinian Authority (Hamas) treated him on their expense in Egypt since Gaza is still under siege and such cancer treatments do not exist there. The doctors in Egypt operated on Eyad and according to his parents they did a very bad job and it wasn’t successful. Then the Palestinian Authority sent him to Iran for more operations. Again, his parents said they were not done the proper way. Israel let him to get some treatments and do tests in Jerusalem but it was very expensive since the Palestinian Authority will not sponsor expenses inside Israel. Also Israel will not Eyad and his parents spend the night in Jerusalem, so they had to go every day back to Gaza through the nightmare of checkpoints.

Then the Palestinian Authority (Hamas) sent him to Jordan to get some Chemotherapy, where I met him in Amman many times. The father had to sell his taxi cab in Gaza to be bale to spend on his family while they are in Amman. After 6 months the doctors in Jordan said that his case is not improving and Hamas stopped funding. After trying to get him into the King Hussien Cancer Center and the bureaucracy of who will treat him and sponsor him financially they returned to Gaza. Though Eyad looked fine but he had a new cancer lump growing near his heart and causing him repository problems. So I was able to gather your donations and send them to Gaza to gem him 2 Oxygen tanks. I tried with PCRF and a Doctor in Haddasa in Jerusalem to let him in but that failed too. The Palestinian Authority (Hamas) stopped sponsoring Eyad and they were left alone in a besieged Gaza!

Two weeks ago I spoke with his parents and they told me they will try to get him out to Saudi Arabia to try alternative medicine. Eyad hasn’t been eating well for a month, lost alot of weight and was having breathing issues. The authrization to leave Gaza strip needs 5 weeks!

I need to clear out that Hamas stopped sponsoring Eyad financially 6 months ago and the family tried many times with the government but according to them the corruption of the Palestinian Authority (Hamas) in Gaza is the same as the one in the West Bank (Fatah)!!

I have to thank the kind people who helped from America, Europe, Egypt, UAE and Jordan!

I really have no words to explain how I feel right now, I guess I’m not used to such loses! I will not blame Israel or Hamas or the corruption of power in the Middle East.

The only thing I can do now is to continue supporting his family after his death! His mom told me that he wanted to visit Amman very badly and wanted to go to the Kids area at Mecca Mall and C Town Mall and to come see Ali, his simple wish was never given to him.

His mom told me ”Eyad is the Martyr of the Siege!”