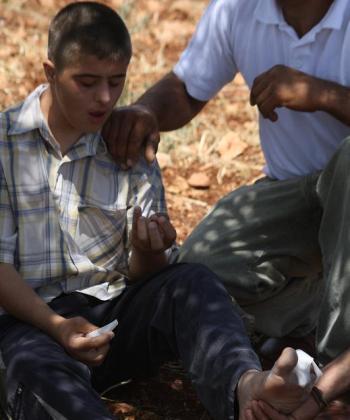 On Friday two children were injured, along with three other civilians, as Israeli troops attacked the weekly nonviolent protest in Bil’in village, central West Bank.
This week’s demonstration in Bil’in was conducted in solidarity with the Israeli settlement boycott movement.

Palestinians, Israelis and internationals gathered to protest not only the wall, but also to promote the boycott of goods produced in West Bank Israeli settlements.

Participants were given literature detailing the dozens of products that are produced on Palestinian land and billed as Israeli products for global markets.

Demonstrators marched to the Wall and attached boycott posters on the fence before Israeli soldiers entered the gate and aggressively fired tear gas into the crowd. Two children, including a mentally disabled boy, were injured as a result.

Iyad Burnat spoke to the group about the village’s efforts to resist the confiscation and destruction of their land.

Haitham al-Khatib’s film, Life on Wheels, was shown, along with a film about the life and death of Bassem Abu Rahme, who was killed by Israeli forces in Bil’in last April at a non-violent demonstration.