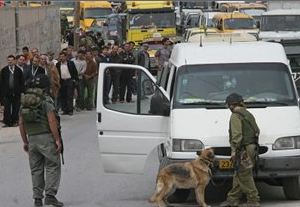 The Jerusalem Center for Social and Economic Rights in Jerusalem (JCSER) reported that Israeli policemen used dogs during their Tuesday attack against Palestinian homeowners as the police attacked their homes before demolishing them earlier in the day in Al Esawiyya, in occupied East Jerusalem.The Research and Documentation Unit of the JCSER reported that resident Mohammad Robin, an owner of a print house that was demolished Tuesday was attacked by dogs unleashed by the police while he was trying to get his father and equipment from the print house.

The dogs attacked and bit the two while the police used pepper spray against them before beating the wife of Mohammad. The police also fired gas bombs during the attack.

The center said that the police used excessive force against the residents who protested the attack. Policemen also broke into a number of homes.

The Jerusalem municipality also demolished two rooms built using wood and bricks, and also demolished a home in Sheikh Jarrah after violently breaking into it and forcing the resident out.

The center slammed the excessive use of force against the residents who became homeless due to an illegal policy.

Also on Tuesday, the police demolished a home that belongs to the family of Nour
Sub Laban, in Sheikh Jarrah in occupied East Jerusalem.

The family was not at home when the police broke into it and demolished it without waiting for the owners to return and evacuate their furniture and belongings.

The Jerusalem Municipality claimed that its workers recently placed the demolish order on the main door of the home.

Furthermore, a warehouse was demolished in Shu’fat town, north of Jerusalem, and the police handed an order against a five-story home in Ras Khamis, in occupied East Jerusalem.