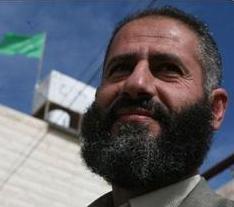 Israeli soldiers kidnapped, on Wednesday at dawn, legislator Sheikh Khalil Nayef Rajoub, after breaking into his home and searching it. His family stated that soldiers surrounded their home located west of Hebron, approximately at 1 a.m., and kidnapped the legislator taking him to an unknown destination.

Fu’ad al-Khuffash, head of the Ahrar Center for Detainees Studies and Human Rights, reported that the soldiers violently broke into the home of Rajoub and informed him that they have an arrest warrant against him.

He stated that the army kidnapped three legislators in the last 45 days; the three are Hatem Qfeisha, Mahmoud al-Ramahi, and today’s kidnapping of Rajoub.

Legislator Rajoub spent four years in Israeli prisons as he was kidnapped on June 29 2006, and was only released five months ago. He was also one of several Hamas officials deported by Israel to Marj al-Zohour in southern Lebanon.

Al-Khuffash demanded international human rights groups to intervene and stop the Israeli violations against the Palestinian people and their elected officials.

On December 17, 1992, Israel arrested and deported 416 members of the Hamas movement and the Islamic Jihad. The deported leaders camped near the borders and held a strike until Israel was forced to allow them back due to international pressure.