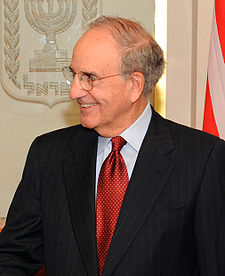 U.S. Special Middle East Envoy, George Mitchell, intends to hold a meeting with Israeli Prime Minister, Benjamin Netanyahu, in Jerusalem on Monday in an attempt to push the stalled peace talks forward. Israeli daily, Haaretz, reported that Mitchell intends to tell Netanyahu that the Obama administration wants a clear stance from Israel in the coming week on core issues, mainly on borders.

Following his meeting with Netanyahu, Mitchell intends to head to the West Bank city of Ramallah to hold a meeting with Palestinian President, Mahmoud Abbas.

Most of Mitchell’s work will be focused on Israel as the Palestinians presented their core demands regarding security, Jerusalem, the Right of Return of the Palestinian refugees, water, borders and settlements in the occupied territories.

This will be Mitchell’s first visit to the region in three months. On September 15, Mitchell held a trilateral meeting with Netanyahu and Palestinian President, Mahmoud Abbas, but the talks failed to achieve any positive outcome.

On Sunday, Netanyahu held a meeting with members of his Likud ruling party, and told them he was “pleased” that the United States now knows very well that “attempts to convince Israel to extend settlement freeze will not bear fruit”.

Netanyahu focused on Friday’s speech given by U.S Secretary of State at the Saban Forum in Washington, in which she hinted that Washington is convinced now that talks on settlement freeze will not bring any progress, and that the U.S. will move on talks on all core issues.

The Israeli Prime Minister was also pleased by Clinton’s statements regarding Washington’s opposition to “unilateral Palestinian moves at the United Nations”.

Furthermore, Israeli Culture Minister, Limor Livnat of the Likud, strongly denounced a speech by Defense Minister, Ehud Barak of the Labor Party, who said that under a peace deal with the Palestinians, Arab neighborhoods will eventually be under Palestinian control.

Livnat stated that Barak should not make such statements, and that he accused Netanyahu of avoiding any clear statement on Jerusalem.