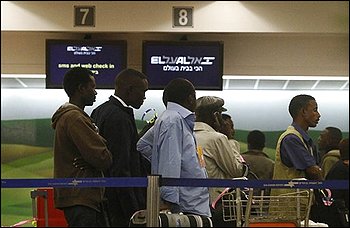 150 asylum seekers were sent back to Sudan, on Monday night, as Israeli officials believed they entered the country illegally in search of work, media agencies reported on Tuesday.
Sudanese migrants, one third of whom reportedly minors, were repatriated on Monday night from Israel, and were returning home via a third country, according to anonymous official sources.

While Israeli authorities asserted the migrants had undergone an organized selection process prior to the return operation, unknown sources noted that some of them didn’t find out they were leaving until a few days before the flight.

The migrant advocates reacted to Israel’s move saying they hardly believed the deportees left willingly, as people had no other place to live or work, and feared they would be sent to jail if they rejected the government’s offer.

The activists expressed serious concern over the Sudanese government’s treatment of the returning asylum seekers, and about what will happen to them given the state of violence in their country. The deportation comes after reports confirmed forces of Khartoum government bombed the southern part of Sudan last week. A referendum, planned to be held next month, over independence from the north is likely to revive the conflict.

A Sudanese asylum seeker, who has been living in Israel for three years, told Haaretz that he was approached by some women, who identified themselves as representatives of the French Embassy and offered him help to return to Sudan, a week and a half ago.

He stated: ‘They came up to me in church and said they had a way to bring people back to Sudan…I wasn’t surprised because my girlfriend left four months ago in a similar situation. She told me they promised her $5,000, but when she got to Sudan, she just got $500. A short time later she fled to Uganda and told me not to consider returning because the situation is still bad.’

Amongst the minor deportees, some were sent back with their mothers while their fathers stayed in Israel. The youngest of them attending the school was in kindergarten and the oldest was in ninth grade. Some of the children had been at the school for the last three years.

At least five of the minors were enrolled in a Tel Aviv school. Although the repatriation was planned for months, early news of the operation did not reach the school until early this week. The students and teachers of the Bialik-Rogozin School were angered for not being given any chance to prepare for the children’s departure, the principal said on Tuesday.

According to Israeli officials, 200 Sudanese have been deported from the country over the past months after agreeing to return home, however the latest operation is considered to be the largest carried out.

The Israeli government recently intensified efforts to prevent African migrants from entering illegally into the country, estimating more than 30,000 people, from Sudan, Eritrea and other countries, have infiltrated in the past five years via its southern border with Egypt.

The government has been building a barrier along the Egyptian border, in attempting to stop migrants, mainly in search of work, from crossing it and it has approved plans to set up a housing facility for those who are detained.