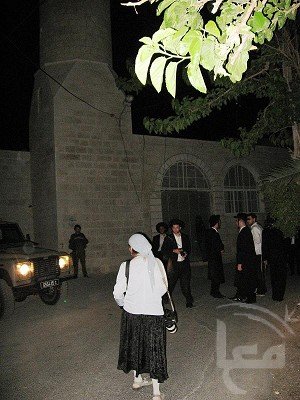 On Friday morning, a group of religious Israeli Jews entered in the village of Kifl Haris, in the central West Bank. Local sources estimated some 3,000 people arrived, accompanied by dozens of Israeli military vehicles, Ma’an News reported. Locals said that the group of visitors were settlers, many of them from settlements in the occupied West Bank, who came to visit a tomb in the village, which according to the Jewish religion, is the place where Joshua ben Nun, leader of early Jewish tribes, and Calev ben Yefuneh are buried. Villagers say the tomb belongs to a local Sheikh.

An Israeli military spokeswoman informed that there were 800 visitors who stayed in the area from midnight to 5 a.m.

She also added that the visit went off ‘without incident,’ although local sources reported that the Israeli army set up checkpoints and barricades around the tomb.

In a report by the Israeli news site Ynet, the visitors stated that they found the tomb ‘desecrated’ by Arabic graffiti with slogans like ‘we are the defenders of the national project’ and ‘conciliation, speak to you enemy through bullets,’ Ma’an News quoted.