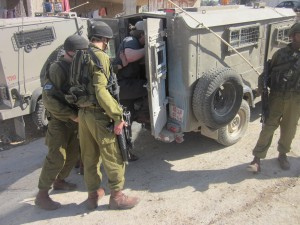 The Youth Coalition Against Settlements stated that soldiers attacked local protestors, internationals and reporters who arrived to provide media coverage.
The protest, held weekly, is conducted by dozens of locals, Israelis and internationals.

This week’s protest was held at the eastern entrance of the Al Shuhada Street, in the Old City. The street was closed by the army several years ago leading to the closure of dozens of Palestinian stores. Only Jewish settlers are allowed to use the street.

The protestors carried Palestinian flags and banners calling for ending all sorts of racial discrimination, and demanded Israel to open the street and to stop the frequent attacks carried out by extremist Israeli soldiers and settlers.

Dozens of policemen and soldiers occupied the rooftops of several homes and used them as monitoring towers, while other soldiers violently attacked the protestors and forced them out of the area after declaring it’s a “closed military zone”.

The Youth Against Settlements reported that soldiers stationed near the Abraham Abino settlement outpost, detained three international peace activists and violently attacked the protestors with batons and rifle-buts wounding four.

Three of the wounded, including two women, were identified as Nawal Akram, Liali Sleimiyya, and Mohammad Amro.

Badee’ Dweik, a local activist stated that this nonviolent protest comes to affirm the legitimate Palestinian rights, including the right to the freedom of movement in Hebron as only Jewish settlers and soldiers are allowed into the Al Shuhada Street since 1994.

Dweik added that the Palestinians reject the resumption of peace talks with Israel under the ongoing Israeli violations and settlement construction.

He said that the Palestinians went to the peace process under the principle of “Land for Peace”, “therefore it is not reasonable to continue the talks while land theft continues”.

The Al Shuhada Street, off-limits to the Palestinians since 1994, is one of the most vital streets in the city, its closure led to separating several neighborhoods from each other as it blocked the connection between the northern and southern parts of Hebron.

In 2000, Israel ordered the closure of more than 500 Palestinian stores in Hebron, and the ongoing attacks carried out by the soldiers and the settlers led to the closure of 1000 more stores.

There are more than 100 roadblocks and military-controlled gates ripping through the city of Hebron.