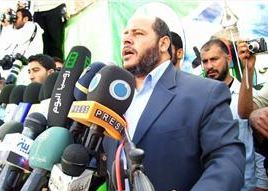 Senior Hamas leaders, headed by Legislator Khalil Al Hayya, held meetings on Saturday evening with different Palestinian factions and independent figures, in the Gaza Strip, in an attempt to form a new government. The movement presented a number of names to be part of the new government.
Al Hayya told the Hamas-affiliated Palestinian Information Center that Hamas and its Change and Reform Parliamentarian Bloc, which dominates the legislative council that was elected in 2006, stressed on the importance of having all factions involved in the new government.

The movement intends to appoint ministers, and to present names of figures who would be part of the new government in the Gaza Strip.

Al Hayya stated that this step is a response to all powers that tried to isolate Hamas and its elected government, and a step towards national unity.

The decision to prepare for forming a new government was approved by Prime Minister of the dissolved Hamas-led government in Gaza, Ismail Haniyya.

The first between the rival Hamas and Fateh movements continues to remain unresolved and the two movements, Hamas in Gaza and Fateh in the West Bank, continue to trade accusation of political arrests.