Asia 1 Makes It Into Gaza 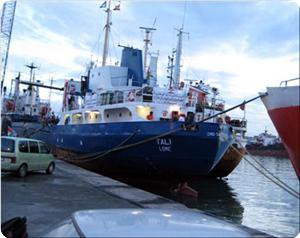 The Asia 1 solidarity convoy managed to enter the Gaza Strip late on Sunday at night to deliver humanitarian and medical supplies to the residents of the besieged coastal region. The convoy arrived at the Al Arish Egyptian port, and after negotiations and deliberations, the Egyptian Authorities allowed the 112 activists, who accompanied the convoy to enter Gaza.

But the Egyptian Authorities excluded the Iranian and the Jordanian activists, and allowed the rest through.

The convoy arrived at the Al Arish Port on Sunday and the Egyptian Authorities decided that it can enter Gaza on Monday morning.

The activists carried 300 Tons of medical and food supplies that would be delivered in Gaza.

The convoy started its trip on December 2 from Delhi, India, but the Pakistani Authorities refused to allow it through, an issue that forced convoy organizers to head back to India before flying to Iran, then to Syria before heading to Egypt.

Convoy organizers were warmly received by thousands of residents in Gaza while several Palestinian factions also welcomed the activists and thanked them for their support.

The Islamic Jihad movement issued a statement saying that solidarity ships, especially amidst ongoing Israeli oppression, are a message of solidarity to the Palestinian people and their struggle against the occupation.