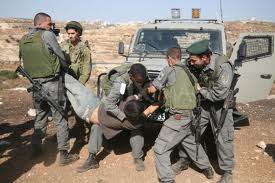 According to an Israeli military statement, the men were placed under custody and later moved to security interrogation for being ‘suspected of terrorist activity’.

In related reports in the West Bank, between Sunday and Monday three Palestinians were detained in Hebron, and the city’s main northern entrance was temporarily shut. Israeli troops also invaded a village, west of Jenin, however resulting in no arrests.

Earlier on Friday, during a military raid in Hebron targeting Hamas members, released by PA forces the day before, Israeli soldiers shot dead an old Palestinian while he was sleeping in his bed. The man was later identified as Wael al-Bitar’s uncle. Soldiers apparently had mistaken the uncle of al-Bitar in an attempt to detain him. The army said it ‘regrets’ the death.