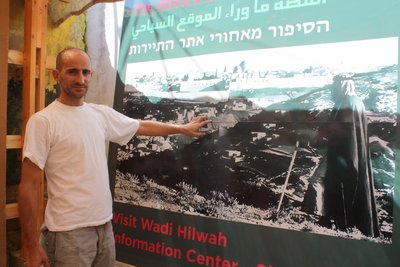 The past week has seen an increase in Israeli repression towards Palestinian community organizers in Silwan, East Jerusalem. Jawad Siyam has recently been targeted because of his involvement in directing the Wadih Hilweh Information Center as well as his membership in the Neighborhood Popular Committee. Today, for the second time this week, Siyam will stand trial at the Jerusalem Magistrates Court.On January 4, 2011 Israeli police raided the Wadi Hilweh Information Center and arrested Siyam after a complaint of assault was placed against him. During his first trial police even admitted that Siyam’s investigation was of a political nature, specifically his role in the Popular Committee and the Wadih Hilweh Information Center.

Mr. Siyam was released by the Jerusalem Magistrates Court just three days ago, 7 January, when the court ruled the prosecution’s evidence was insufficient. The same day Mr. Siyam received a phone call from Israeli police to inform him that the “investigation” would continue.

Siyam was initially ordered by the judge to complete a week-long period of house arrest once released, but Siyam refused to accept these conditions. The court agreed that Siyam may serve his house arrest period at the Information Center.

Isareli police are working hard to find ways to imprison Siyam, by any means necessary. They have requested from the judge nothing less than a sentence of one and a half years house arrest is served outside of his home, in Silwan.

The Information Center has been at the forefront of spreading independent and balanced news about the tumultuous situation in Silwan. The center also serves as children’s center, where neighborhood children can dedicate their time to more productive activities, such as music lessons, amidst the violence they face everyday.

Other Silwan community activists have been recently targeted, namely Adnan Ghaith. Gaith is an active member of the Al-Bustan Popular Committee. He has been fighting a lengthy legal battle with Israeli authorities in order to prevent his deportation from Jerusalem for a period of 4 months. The deportation is to start on January 12, 2011.