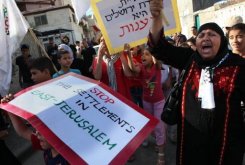 In a new confidential report published by The Independent on Monday, the European Union proposed having EU officials observe at sites of imminent house demolitions or evictions in East Jerusalem, and to step in when non-violent Palestinians are arrested. The 25 EU Consuls General in Jerusalem prepared the proposal in a move to strengthen the EU’s support for the rights of Palestinian residents of East Jerusalem.

The EU top officials warned that Jewish settlement activity in East Jerusalem is jeopardizing the two-state solution to the conflict in the region. They also argued that the Palestinian population in the city is being systematically undermined as a result of Israel’s annexation.

They suggested that they should not only be present when demolition or eviction operations are carried, out but also attend court hearings in this regard, and to ‘ensure EU intervention when Palestinians are arrested or intimidated by Israeli authorities for peaceful cultural, social or political activities in East Jerusalem’.

The Consuls urged for boycotting all settlement products and goods, and indicated that they would refuse to be escorted by Israeli security officers when touring in the Old City and other parts of occupied East Jerusalem.

They also urged their governments to consider East Jerusalem as the capital of Palestine, and to refrain from holding meetings with Israeli government officials in East Jerusalem.

The document also states that the daily life of the Palestinian people is directly impacted by the Israel’s policies towards East Jerusalem. – including settlement activities as well as ‘restrictive zoning and planning in the Arab areas, ongoing demolitions and evictions of Palestinian homes, in addition to Israel’s inequitable education policy.

It added that the Palestinian face enormous difficulties in accessing health care in the city, and are facing inadequate provision of resources and investment’.

On the ground, plans to destroy illegal homes in the east Jerusalem neighborhood of Ras Al-Amoud were reported on Monday morning. Although the police confirmed sending forces to carry out the demolition, the municipality did not confirm that it was preparing to implement any demolition orders.

The newly released report comes on the heels of the EU’s strong reaction to Sunday’s demolition of Shepherd Hotel in Sheilah Jarrah neighborhood to make way for an illegal settlement in occupied East Jerusalem.

EU Foreign Affairs Chief, Catherine Ashton, denounced settlement activities, and stated that the construction of settlements “undermines trust between Israel and the Palestinians, and constitutes an obstacle to peace.’

She reiterated the EU stance and said that ‘the EU does not recognize the annexation of East Jerusalem by Israel’, and expressed concern over recent violence in the West Bank.