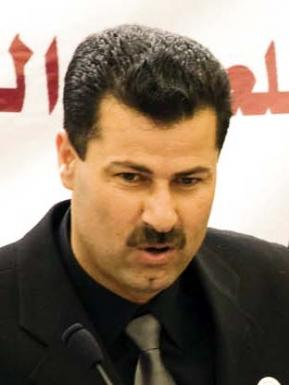 UPDATE: Today, the Israeli Military Court has accepted the military prosecution’s appeal to extend Abdallah Abu Rahmah’s sentence. Abu Rahmah was supposed to be released on November 18th 2010, but was kept in detention at the military prosecution’s request despite having finished serving his term. He will now serve an additional 2-3 months in prison, making his serving time a total of sixteen months.
Abu Rahmah, the coordinator of the Bil’in Popular Committee Against the Wall and Settlements, was arrested last year by soldiers who raided his home in the middle of the night and was subsequently indicted before an Israeli Military Court on unsubstantiated charges that included stone-throwing and arms possession.

In his verdict, the judge argued that there were many similarities between Abdallah and Adeeb Abu Rahma’s cases. In his view, “It is clear that Abdallah did not choose to carry out his struggle using recognised or accepted methods of freedom of expression. In addition he chose to include others in his actions. Instead of giving him a round of applause the court should recognise that he has been a part of a violent struggle which has continued over a long period of time. Abdallah is a member of an organisation which disturbs the public order by carrying out acts which have been pre-planned, not taken spontaneously.”

Adv. Gabi Lasky, Abdallah Abu Rahmah’s lawyer: “Israel has tried violent means to hinder and stop the popular unarmed demonstrations in the West Bank. Military courts are an instrument of the occupation and their verdicts are devised to help the occupation continue. This decision makes a mockery of the law and justice itself.”

The prosection was aiming to keep Abu Rahma imprisoned for two years and it
openly argued that the sentence should be extended for political reasons, namely ‘to serve as a deterrence not only to [Abu Rahmah] himself, but also to others who may follow in his footsteps.’

On October 11th, Abu Rahmah was sentenced to twelve months imprisonment for his prominent role in Bil’in’s successful campaign against the construction of Israel’s Annexation Wall on its lands. Abu Rahmah was convicted of two offenses – incitement and organizing illegal demonstrations, but was cleared of all charges connecting him with direct violence.

Abu Rahmah was declared a human rights defender by the European Union, and his conviction and sentence generated international outrage, and was denounced by human rights organizations and the international community alike, including EU foreign policy chief, Catherine Ashton.