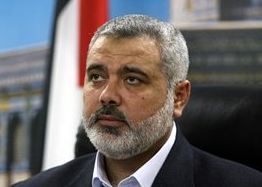 Prime Minister of the dissolved Hamas-led government in Gaza, Ismail Haniyya, stated Sunday that the Egyptian Authorities are interested in inviting Palestinian factions, mainly the rival Fateh and Hamas movements, to meet in Cairo, once again, in an attempt to end the internal divisions. The statements of Haniyya came during a meeting with representatives of the Kuwaiti Journalist Society on the sidelines of a dinner in Gaza.

Haniyya stated that Egypt’s Intelligence Chief, Omar Suleiman, informed him over the phone that Cairo wants to resume its mediation efforts in an attempt to achieve internal Palestinian unity.

He added that the Egyptian initiative reflects Cairo’s belief in the importance of dialogue that could lead to Palestinian reconciliation and unity.

The Hamas leader further stated that once the invitation is officially received, Palestinian factions, including Hamas, will discuss it with a positive attitude.

During the general elections of 2006, the Hamas movement achieved an overwhelming victory in the elections and was even able to form a strong government by itself. Before the legislative elections, Hamas also won municipal elections in the West Bank and the Gaza Strip.

Later on, especially in mid-2006 after the Israeli soldier Gilad Shalit, was captured by three Palestinian groups based in Gaza, Israeli imposed a siege that lead to the death of several hundred Palestinian patients due to the lack of essential supplies and medications.

Following the elections and the vast majority of government and legislative council seats garnered by Hamas, Israel and the United States led an international campaign to isolate the movement and to topple the government.

As a result, the army kidnapped dozens of elected legislators, ministers, mayors and senior elected officials of the Hamas movement in order to prevent the government from functioning.

Violent armed clashes also took between members of the Hamas and Fateh movements in Gaza, leading to hundreds of casualties before Hamas’s security forces managed to gain control over the Gaza Strip. Most of Fateh leaders fled to West Bank.

Currently, Hamas is trying to run the government in Gaza, while Fateh movement is controlling the government in the West Bank. The “power” currently Fateh possesses over Hamas is significant financial support by the US, the EU and other countries and the development projects sponsored by the fore mentioned countries.

The U.S even trained Palestinian security forces members in the West Bank to counter Hamas, and provided them with weapons and light combat equipment.