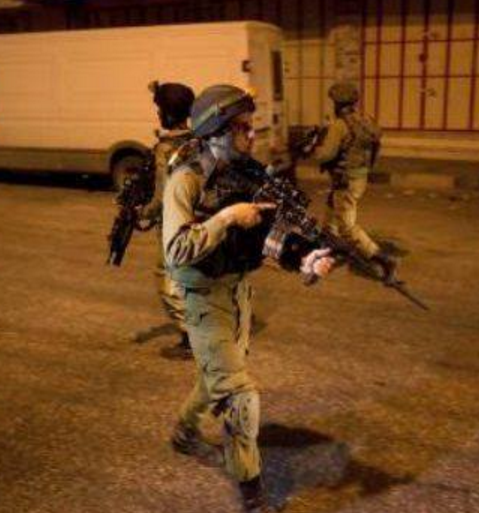 The Palestinian Prisoners Society (PPS) has reported that the Israeli army has kidnapped two Palestinians, in the northern West Bank districts of Jenin and Tulkarem, in addition to summoning two others for interrogation. Many Palestinians were injured.

The PPS said the soldiers invaded Jaba’ town, south of Jenin, and kidnapped a former political prisoner, identified as Nazeeh Abu ‘Oun, after storming his home and searching it.

It added that many Palestinians suffered the effects of tear gas inhalation, during clashes that took place between the invading soldiers, and local youths, who hurled stones and empty bottles on them.

The soldiers fired many live rounds, gas bombs and concussion grenades, some hitting homes, causing many Palestinians, including children, to suffer the effects of tear gas inhalation.

In addition, the soldiers invaded Tulkarem refugee camp, in the northern West Bank district of Tulkarem, kidnapped one Palestinian and summoned two others for interrogation.

The PPS said the soldiers kidnapped Adnan Khader Abu Bakr, 50, after ransacking his home, and that the soldiers invaded and searched dozens of homes in Tulkarem city, in addition to Tulkarem and Nour Shams refugee camps.

In Gaza, several army vehicles invaded Palestinian agricultural lands, east of Rafah, in the southern part of the coastal region, and fired many live rounds while military bulldozers uprooted the lands.

On Tuesday at dawn, the soldiers kidnapped seven Palestinians in the southern West Bank district of Hebron, and eleven others in occupied Jerusalem.