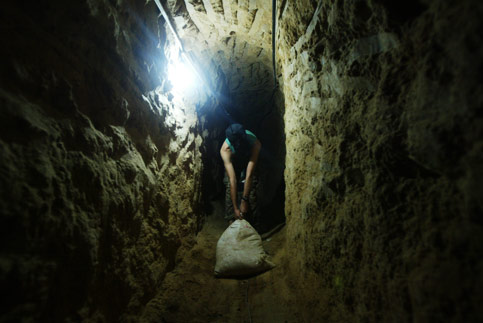 As underground tunnel trade drops, Gazans report fuel shortagesMerchants and tunnel workers said the pace of smuggling fuel and other materials into the Gaza Strip had dropped in recent days, and reached its lowest level on Saturday amidst clashes between Egyptian residents of north Sinai and security forces.

Gazans get most of their fuel from Egypt through underground tunnels.

Clashes in Egypt made it more difficult for smugglers to smuggle fuel supplies through tunnels that run under the border into the enclave.

Fearing that makeshift fuel pipes that run through the smuggling tunnels would soon dry up completely, Gaza car owners filled their tanks, and took extra cans to stock up with additional supplies.

A statement issued by Hamas officials tried to calm fears by saying that there was no shortage of any goods in the coastal strip but the statement did not deter drivers from filling their cars.