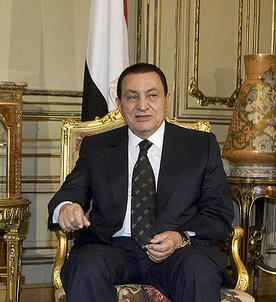 In an official statement presented by Egyptian Vice President Omar Suleiman, the Egyptian President Hosni Mubarak declared on Friday his resignation as President and handed over the leadership of the country to the High Command of the Armed Forces to run the country until new presidential elections are held.Mubarak was forced to step down after 18 days of non-stop popular resistance with millions of Egyptians in the streets of Cairo, Alexandria and most of the other Egyptian cities and towns.

Following the stepping down of Mubarak, Israeli officials expressed concerns over the future of the relations between Egypt and Israel.

Millions of Egyptians who were in the Tahrir Square received the the news with cheers and celebrations. According to the Egyptian Constitution, Vice President Omar Suleiman also should step down as his post is related to the President.

Presidential elections should be held soon, and a number of candidates are expected for the first time in 30 years.

On his part Dr. Mohammad El-Baradi’i one of the main opposition figures said, this is a day of “Liberation” for Egypt.