Cabinet In West Bank To Resign, New Ministers To Be Selected 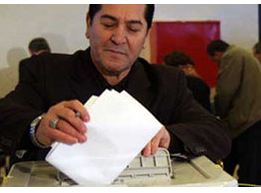 Reuters reported, Sunday, that the Palestinian cabinet in the West Bank will be submitting its resignation on Monday, to enable Prime Minister, Dr. Salaam Fayyad, to select new ministers under a request from President, Mahmoud Abbas. The decision came after repeated demands made by Dr. Fayyad and some senior members of Fateh movement.

It was seen as a step that is likely pushed by the latest revolutions that brought down the regimes of the Tunisian and Egyptian presidents, and popular protests in other Arab countries demanding change and reform.

Yet, the move will not bring the Fateh-Hamas conflict to an end, as the elected Hamas-led government remains under siege and was never given the change to act properly due to Israel’s siege on Gaza and the arrests against elected legislators, ministers and officials.

Sources within the Palestinian government in the West Bank said that Dr. Fayyad will be holding discussions with several factions to form the new cabinet.

The Palestinian Authority in the West Bank is backed by the United States and several European countries, but cannot fully function due to the Israeli invasions and to its restricted and limited “control” in the West Bank.

The Hamas movement achieved an overwhelming victory in the legislative elections in 2006, and rejected a recent decision made by the Palestinian Liberation Organization (PLO) to hold general elections later this year. The decision was made on Saturday, with the PLO decided that elections will be held by or before September.

Hamas said that elections cannot be held before achieving unity and reconciliation, especially amidst the ongoing siege on Gaza and its repeated attacks. The movement added that it will not recognize the elections and their outcome.