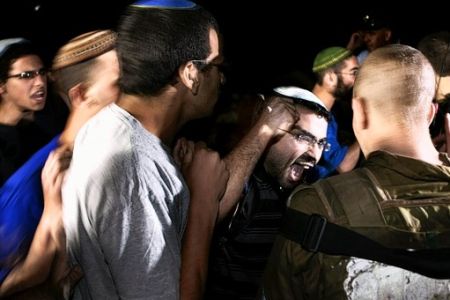 A group of heavily-armed Israeli settlers stormed the village of Beit Ummar, in the southern part of the West Bank, on Sunday night. They harassed villagers but caused no injuries, according to local eyewitnesses.The incident took place just two days after a large non-violent protest was held in the nearby city of Hebron challenging a planned ‘marathon run’ by Israeli settlers through Palestinian towns and villages. Settlers in the Hebron area are among the most violent toward Palestinians, with dozens of incidents of harassment and violence documented in the last two months alone.

The area around the village of Beit Ummar has been slated by Israeli settlers for an expansion of their colony located on stolen village land, and a number of violent assaults on Palestinian farmers trying to harvest their crops have taken place in recent months.

In addition, the Israeli military has begun construction of the Annexation Wall through the middle of the village’s land, and non-violent protests have taken place every week for the last several months to challenge the illegal confiscation of the land.

The Israeli military spokesperson told a reporter from the Ma’an News Agency that the military had no knowledge of the Israeli settler provocation in Beit Ummar Sunday night.